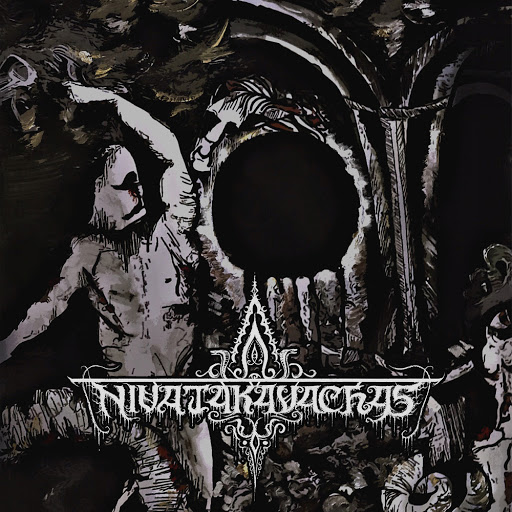 One man from Switzerland known as Bornyhake, known for his other acts like Pure, Borgne, Enoid, and many others, has yet again presented us with a new morbid offering for us to listen to. This latest atmospheric step into death metal known as Nivatakavachas is a cacophony of of dark and twisted riffs accumulated together in a wicked thirty-three minute aural assault.

Getting into it right away, there's no messing around with the start. Immediately you're bombarded by massive sounding drums, twisting guitar riffs with an ear piercing tone to it and harsh vocals calling out from the nether. The production style is also very high quality, keeping the raw aggression where it needs to while keeping the integrity of the instruments alive. With only three tracks on the album, its impressive how much Bronyhake was able to fit into this release. The songs are all very progressive with tempo changes and wicked solos that rocks one to their very core. There are some black metal influences in here as well thanks to the first track mainly.

The first track Capnomancy is almost like a very fine blend of black and death genres mixed together, with the blast beats and dissonant guitar pieces, its only when the tempo change suddenly happens where its clear, with just how heavy and brutal the bass guitar is that it is indeed death metal. Each instrument is played flawlessly, and as I've mentioned in my other reviews, there's something about one man acts that I get drawn to. The focus is very prominent in this particular act, and you don't get much bleed over from his other works. Its clear that when Bornyhake has a vision, he sticks to it and doesn't deviate from it at all.

As the album later progresses the death metal parts become very clear as the second track Oneiromancy is a very brutal and fast paced song that leaves no prisoner behind. This track in particular is my favorite because of a certain guitar passage towards the middle of the song that is almost psychedelic and very atmospheric thanks to the, what I can only assume is some sort of synth that drones in the background and creates a very demented sound, and a great backdrop for the guitar. This later repeats later on in the track and it just doesn't get tiring at all.

And finally the last track, and the longest one at that, Hepatoscopy, is just your run of the mill death metal track. Very brutal, very heavy, and very dark. It honestly can get a little bit tiring towards the end, but its a good listen if you single it out on its own. It feels like a smaller album within an album if that makes any sense.

Either way, this album is a very solid release, and a perfect addition to Bornyhake's catalogue of cryptic aural darkness. Highly recommend this one if you like your death metal to be atmospheric and have a little bit of black metal qualities in them.