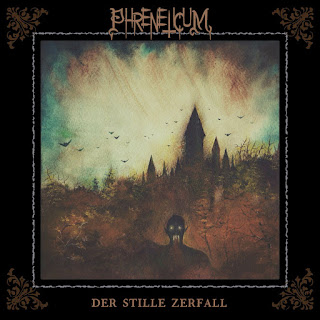 Hailing from eastern Germany, Phreneticum, a two piece black metal act of cryptic proportions presents us with their first ritualistic offering. Der Stille Zerfall is a heavy lo-fi experience with hazy production and hypnotic riffs that capture the listener in its hellish gaze.

What immediately captured me with this album are the tones and sounds the album produces. With the incredibly hazy guitar tones and booming echoing drums it creates an almost industrial feel to it all. Especially since the drums have an almost electronic quality to them, most likely produced by an e-kit or some sorta triggers, but I could be wrong. Either way, the guitar riffs and passages are very captivating. Heavy, slow at times, but very ferocious, it creates a very dark and oppressive atmosphere. The vocals as well are almost bestial, wicked high pitch screeches all through out the album, its very much blended well into the guitar thanks to the added effects over it. Which to me is one of the shining moments on the album. The vocals are very memorable and stick with you due to how wicked they sound.

What I found interesting about the album as well are the faster blast beat sections that transition very well from the slower doom metal-esque parts that are very reminiscent of the black/doom band Abigorum, which is understandable since one of the members of this band is apart of Phreneticum. They took what they've learned working with Abigorum and added their own vision to it. While the doom is very much there, its not all slow. There are blast beats, powerful double bass drums, and a methodic pace that keeps the rhythm going.

The drumming on this, though, clearly wasn't the focus of the album. There are call backs to a certain riff that the album began with and seem to end with in a alternative way. Changing the tempo of the riff or maybe changing a few notes around but keeping it in the same key. I feel like the drumming is simply there just to provide some sort of bass and weight to the guitar sounds, since with the style of production that they chose kind of leaves the guitars feeling very airy and ethereal but, in the end it works out very well, and creates a great sense of atmosphere that is very gothic as well.

This is a very well made album that I enjoyed a lot. There's a lot to offer I can see this band expanding their sound in the future, makes me wonder what other morbid sounds they wish to produce in the future. Highly recommend this to those who're into slower black metal with clear doom influence.