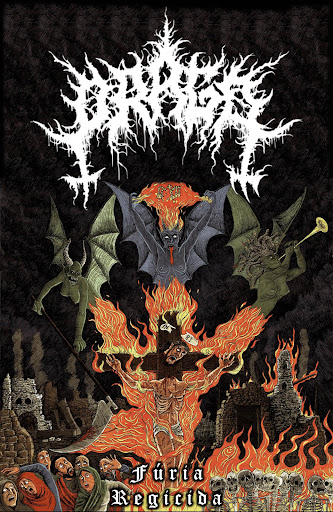 Another decrepit act from the Brazilian underground, Praga releases their first underground offering, Fúria Regicida, a blackened thrash assault that has its roots firmly set in the old school nature of Sarcófago, Bathory, even elements of earlier Beherit. It is as raw and animalistic as it gets. These black-thrash occultists are no strangers to the scene, sporting a demo, an EP, and featuring on a couple of splits, they're familiar with the dark world of the underground.

Jumping straight into it, this album leaves no survivors behind. Immediately you're greeting with crushing guitar riffs whipping past you at blinding speeds and a hyperactive d-beat drumming that possesses you into head banging or tapping your toe all the way through. What I like about this release is that its not like many other South American acts that tend to follow in the same footsteps. It has a very fresh feel to it thanks to the individualistic guitar riffs that aren't simply rehashes of other bands, as well as the wailing solos that again, not just lifted from previous acts. Its easy to say that the band is able to stand out on its own thanks to that. You also have the song writing, which has a more black metal influence, especially of the first-wave kind. Its viscous and raw yet clean and eligible, which is a nice change of pace to the typically muddy style of production these bands tend to fall into. The vocals are bestial and raw, almost reminding me of Quorthon's early performances. Its somewhere in between a screech and a yell, and plenty of black-thrash flavor in the flow of its delivery.

Each song can stand individually on their on, but its a nice touch when each track flow into one another almost seamlessly. I'm not sure if this was intended, but it fits very well. Its almost as if each track is simply apart of one long song. None of the tracks over stay their welcome as well, all of them being under five minutes is something rather impressive, since the music isn't lacking. You'd expect with such short play times, it'd leave you wanting more. But with the intensity of the riffs, and just the pace of the album all around, it'd certainly get boring after a while. But, as a whole running just under thirty minutes, its a nice length that fills in everything that it needs too.

All in all this is a very solid release and stands out amongst the black-thrash crowd. These guys don't reinvent the wheel here, they keep it traditional and trve. Its well performed and plenty of individuality all through out the album. But, in all honesty, it falls just a little flat as they don't really stray to far from the formula. Either way, I still enjoyed the album very much, and I would recommend it to those who enjoy first-wave black metal or speedy black thrash of old.