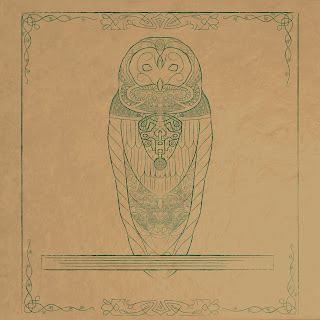 For a debut album this is truly monumental. Strix Askesis, releasing their self titled debut completely blew me out of the water. Creating their own unique interpretation of black metal in a beautifully written manner. Not much is known about the members within the band, but its not needed, as all is what needs to be said can be heard through the music at hand.

To begin with, what strikes you is how raw and abrasive the style of production is. Taking after bands like Bone Awl, Ildjarn, or my personal favorite of Wagner Ödegård's works, using a very crunchy sound guitar tone with raw almost wooden sounding snares. The riffs are similar as well, but, unlike the previously mentioned bands, Strix Askesis takes a different turn, creating more progressive and at times extremely sharp sounding riffs that pierce straight through the noise to create very memorable moments. There's even more of a punk influence in the music than previously mentioned acts, as well as taking an almost alt-rock vibe to some of the riffs. There's plenty of chugs and moments to jump along too if feeling active.

What I also love is how each song is written. Each of them having a clear progression and have an almost extreme and fast prog-rock influence that seeps into tracks like the second self titled track, or the following track The Looped Road, with its winding riffs that twist and turn like a serpent with melancholic break downs and moments to pause and self reflect too. Its very much a thinking man's album when it comes down to it. What's also a very nice touch is how each track seamlessly flows into one another, creating unnoticeable transitions, but if a song is played on its own, it still can stand for its self with out needing to rely on the other. That's very apparent on the fourth and fifth tracks that seem almost like they were meant for each other. My favorite is the fourth track, Through Wilde Wood I Approach. What's fascinating about this track is at around the half way point is a very 2000s punk sounding break down that crawls to a screeching halt. But ramps its self back up again as the guitarist strums a couple of notes and the building blast beats. Its serene and almost shoegaze like.

The vocals are also visceral and raw. Taking more influence from crust-punk with the vocalist simply barking out at you at times with raw aggression. They're layered just right, and while I am personally curious about what he's screaming about, the lyrics are rather hard to point out. But, it most likely won't over take the impressive instrumentation. The album also runs at a decent time at just a few seconds over 45 minutes, but it could be much longer and I don't think I would get tired of it.

This album is criminally underrated and truly massive for a debut album. Strix Askesis were able to create a fusion of many different sounds and what ever musical influences they had into a cryptic and awe-inspiring album that I think will probably stay with me for a very long time. I highly recommend ALL to listen to this album.