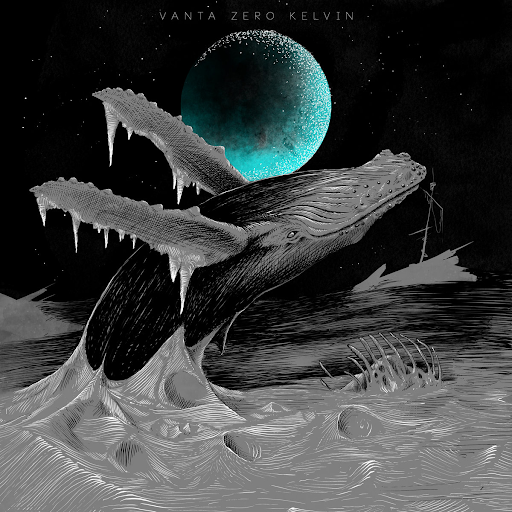 Vantablack is a man made material that is said to be the darkest known substance to ever exist. It absorbs about 99.965% of all light that comes in contact with it. Vanta, on the other hand, is a Hungarian metal duo who've recently released their newest full length LP, Zero Kelvin. You can say this music is dark as well, with themes of dystopian worlds, apocalyptic encounters, and torrential internal dialog. Accompanied of course by crushing bass and guitar tones and a drum that simply slaps down those who stand in its way.

Now, getting into the details of the music, you get a really cool mixture of different genres here. Plenty of doom and sludge metal riffs with the incredibly fuzzy tones, and harsh vocals distorted right along side the instrumentals. But you also have grunge elements, and even some alt-rock style song writing, especially in the later half of the album. Balázs Söptei, front man for the band and multi-instrumentalist, provides his vocals and he nails the harsher parts for sure. While, I do think the clean vocals fit the aesthetic and tone of the album well, there was only one part that sorta took me out of the whole thing, thankfully it was only in the first track. Towards the middle of Welcome to Absurdistan, Bitch, is a weird and psychedelic sequence, where it almost sounds as if he's speaking over a loud speaker or an old radio, warning about how, you're gonna be next to fall when society collapses. While it is a cool and interesting part, I just felt it didn't fit the album at all and felt a little awkwardly placed.

Other than that, this is an incredibly solid album. Each track is incredibly hard hitting, head-banging and fuzzy metal, one of my favorites off the album is for sure the second track Church of the Holy Shit. Its a groovy and hard hitting banger. A perfect mixture of the genres that I've mentioned before. The cleaner vocals are delivered very well and full of emotion, and the added effects to it are a very nice touch.

The song writing is also really catchy, I've been listening to this album for a couple of weeks now, and it just hasn't left my head. And what I find very pleasurable as well is how fun it is to sing along with the music too. I find that its a perfect mixture of incredibly heavy, but easily accessible to those who may not be fans of heavier rock or metal. Beyond the vocals and song writing though, the production is just massive. Much like the cover, it sounds like a whale breaching the water and slamming down. That massive force simply rocking you to its core. Pairing this with some headphones or a sound system with good bass will surely be rocking your windows, and its perfect.

All in all this is a very solid album that was a pleasant surprise on me. The clean vocals did take a little bit of time to get used to, as they're not the best in the world, but its full of passion, and to me that's what counts the most. I'd suggest this to anyone who enjoys heavy or hard rock and metal.