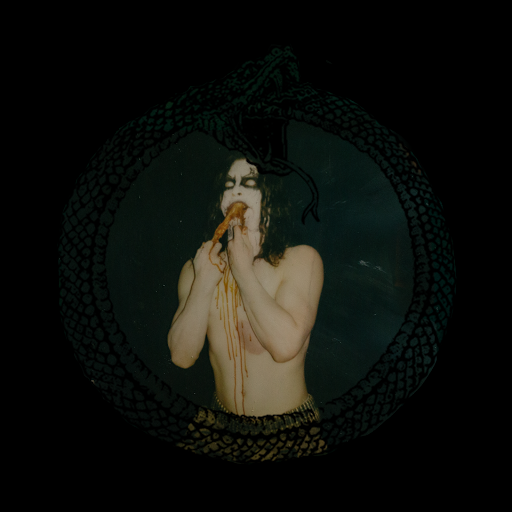 Crawling forth from the necrotic underground of Canada, Wurdulac releases their first full length, Lurking Hand of Fate. This is a oppressive, claustrophobic, and dark album with cannibalistic tendencies thrown in to create a unique lo-fi experience that is unlike others of similar 'vampyric' style.

There are no compromises with this album. Immediately you're attacked by the harsh feedback of guitars and soon the crushing and rather muddy riffs are thrown out at you. Sluggish, slow, and doom like, they draw you into a hypnotic trance that leads you into the rest of the album. The style of production and the amount of feedback on the guitars are almost reminiscent of drone metal acts, almost as if Sunn O))) took some speed. Another thing about these riffs is just how much it covers up the rest of the instrumentation. From how overwhelming the feedback is, it creates a very tight space for the music to really flow through, but if given enough attention you can really pick out the creative riffs and especially drum patters all through out the album.

Speaking of the drumming, they're probably the best part and most likely the main focus of the album its self given the stylistic approach with the guitars. The drums can switch between slow, methodical and hypnotic, with real good timing especially on the slower parts. When paired with good speakers or a nice pair of headphones to sift through the necrotic haze of the guitars, you'll find the really unique drum patterns out side of your typical blast beats found in albums similar to this. One particular drumming pattern that stood out to me is from my favorite track off the album Vampyric Curse, a furious track with an almost upbeat boom-bap style drumming that gives it a crust punk feel to it all. Especially when paired with the riffs on this one which are a bit more audible compared to the rest of the album. Very simplistic and primal.

Moving on to the vocals, these are an interesting part of the album as they're both very forward and layered on top of all the noise, while at the same time adding to the necrotic haze the album produces thanks to the added echoing effects, giving it a very dark and dream like effect. The sole member of the band known as Vassago, nails this part very well. He screeches out this cryptic and harsh vocals in an almost inhuman fashion. A true creature of the underground. Its a perfect level of atmosphere the vocals help create especially with the already cavernous ambient pieces that are strewn through out the album, letting the listener rest for a moment, but only just that. These ambient pieces truly create a feeling of dread and uncertainty of what's the come.

This is by far one of the better lo-fi 'vampyric' style black metal I've heard in a long time. With a unique almost psychedelic twist to the whole thing, its a easy must listen for those who enjoy harsher black metal. Hoping to see more from this artist in the future.