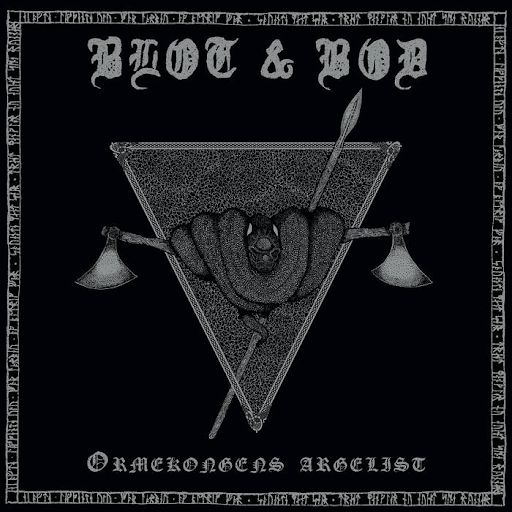 Denmark seems to be forgotten among the Scandinavian black metal scene. But that doesn't mean that what they provide is something to scoff at. The Danish black metal underground is an incredibly powerful force that has been festering in the shadows of their northern cousins. The Korpsånd circle is one of those examples. A collection of artists who create powerful, dark, and chaotic music in honor of their heritage and roots. Blot & Bod is one of those bands. Being formed by three members, two of which, Eirk and Jesper Hviid, were the brothers I mentioned in my previous review on Broder. Joining them on bass is Jøran Elvestad and together they create a powerful trio.

The music brings you in raw and heavy, with very little to mess around with. The drumming provided by Erik are punishing and truly soul crushing. Very mechanic and angry blast beats all through out. The guitars and vocals are for sure where it shines. All three provide war-like cries that call out for the blood of their enemies. They're visceral and truly barbaric, bordering punk styles shouting out verses. The track lengths and styles also dip into the punk zones from time to time. While stylistically very much black metal, the tracks are fairly short, none of them even getting near the five minute mark.

Each of the riffs you hear are short and simplistic, but just as aggressive as the rest. They're again, bordering on the punk side with the short style repeating with the verse/scream chorus/verse structure. It creates for a very fun and catchy listen. I wouldn't go as far as calling it crust punk, but it is a very aggressive and abrasive fusion of black metal and punk for sure. I can't say there are many bands out there that have a sound that's similar to this. These guys have truly created something very unique, and something that really dragged me deeper into the black metal rabbit hole back when it came out.

At the end of it there isn't much else needed to say. This is a furious battle, a warrior's album. Its short, cut throat and to the point with plenty of aggression to pass around. On top of that the musicality of this band is top notch. This album is a must listen for those who can come across it.