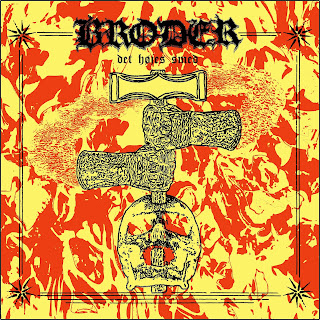 The Hviid brothers hailing from Denmark, known for their work in black metal band Blot & Bod have come together to release a wicked and captivating release under their other band Broder. This is a unique take on war metal, filled with vitriol and vigor. It tells tales of death, mythology, sacrificial rites, and plain out war. 'Mud, fire and steel...' as quoted from their bandcamp page, and very fitting I might add.

This isn't your typical war metal album by any means. It seemingly starts out like any other one of these albums, with an ambient intro. But even then, its unique. The sound of a harsh, cold wind, and the crude and disgusting sound of what to me sounds like the butchering of meat and the clanging of metal in the distance. Its quite the intro for this album. The second track, begins the music at hand. Chaotic, crude, filled with the harsh realities of war. Its incredibly dense, with chunky riffs with incredibly deep distortion and the sound of frantic yet skillfully played drums hammering away in the background. The vocals, very much in style of the brothers, not deviating much from their previous works in Blot & Blod. Harsh, deep barking. The words being thrown at you like knives. The way the songs are structured is also unique for this type of black metal. Its not full blast beats all the way through, instead there are slower, more doom metal type moments on this album as well as even some punk like elements thrown within, very much in style of their previous works. But fear not, as there are plenty of hellish blast beats to go through on this one.

What I find interesting is how each of the tracks are separated by these unnerving and almost disgusting sounding ambient tracks. I say disgusting because the mental image one gets from some of these tracks can be gruesome. The wet sounds of meat and blood being chopped and ripped apart. Bone snapping and metal clashing. All taking place within a dark cave inhabited by ogres and jötunn where they butcher their victims alive. But it fits with the music that follows, even continuing such imagery within. For example, the third track Stenen, has sound of blade being sharpened preparing for its next victim. But the track that follows features the same metallic sound and continues it with the cymbals on the drum all through out. A nice touch when combined with the incredibly heavy riffs that soon follow. A battle taking place obviously.

When listened as a whole, this is a killer release from front to back. Its dark, twisted, warmongering atmosphere creates for an uncomfortable but rewarding experience that drags you through the mud with no remorse. Another on the list for best album of the year for me, and hopefully you feel the same. Give this a listen.