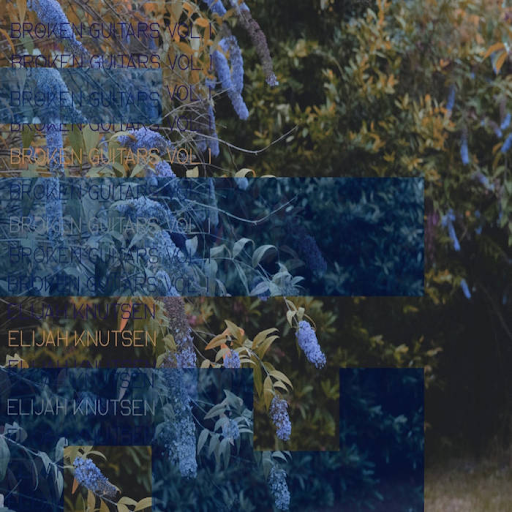 Hailing from Portland Oregon, Elijah Knutsen presents us with his latest release Broken Guitars Vol. 1. A harsher and more melodic take on his usual ambient productions. I've talked about his release earlier this year Pink Dream, a transient and wonderfully ethereal album with sounds full of texture and color, its a rather beautiful piece. This on the other hand, takes it in a different direction, implementing more of a shoegaze and noise rock influence which creates for a rather pleasant and nostalgic sounding album.

Starting out with it, the first two opening tracks are my favorite. The first one, Dreams Burn, is a dense and incredibly fuzzy shoegaze track. What really surprised me was the guitar solo towards the middle of the track. It has an almost disjointed and gleeful way to how its played. On top of that is almost like a sense of happy nostalgia, really bringing to mind hot sunny days of a time gone by. That seems to be a reoccurring theme within Elijah's discography as a whole is a sense of nostalgia. The same could be said for his previous release as well, Memory Color: Orange.

The second track off of this album, Try to Understand, sounds very much like some sort of long forgotten My Bloody Valentine b-side. Its a lone guitar, repeating an incredibly fuzzy and harsh guitar riff over and over. I thoroughly enjoy how meditative this track can be, and the riff really gets stuck in your head for a long time. But, if I did have one gripe, I'd be that it feels like it's trying to go somewhere, following up from the riff, but it simply falls back again, repeating it. It makes me wonder what a full song using this kinda riff would sound like, but its still enjoyable none the less.

The rest of the album takes a turn, leaving behind the melodic aspects of the first two tracks, and starts to devolve back into the rather familiar ethereal ambient tracks Knutsen is known for. The following four tracks are all beautifully tragic noise tracks. I say tragic mainly because, to me at least, there's this real deep sense of melancholy in them. The heavy distortion at times can be suffocating, but its very meditative if you don't try to fight and and find a sense of reason within it because through the chaos comes the beauty Knutsen. This was an incredibly enjoyable album that I'd like to recommend to everyone who's interested.