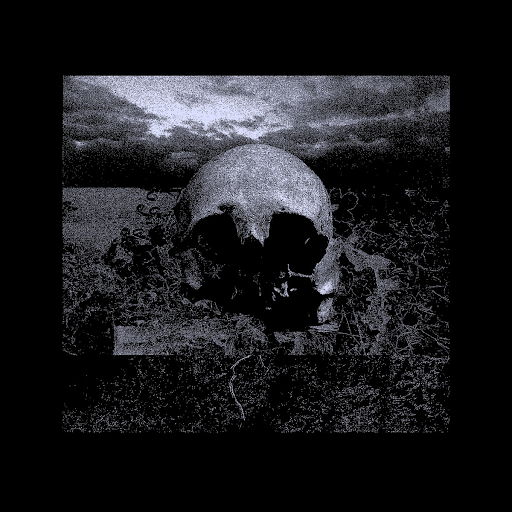 Hailing from Slovakia, Domkirke Av Plager brings us their seventh offering to the abyss. A dark, twisted, and droning album with very minimal instrumentation save for a heavily layered and distorted guitar, repeating melodies and thick atmosphere. While it carries the branding of black metal, to me, its a bit beyond that label. It feels much more massive and introspective than most other raw atmospheric black metal acts out there.

First I'd want to mention just how perfect this style of production is for the album. The guitar is audible and are not over taken by any sort of effects. On top of that, the layering effect added onto the riffs create a twisted swirling like effect, creating an almost hypnotic like effect. Truthfully, the album feels more like an experimentation on different droning effects and pedals and really succeeds at creating something incredibly deep and introspective. The riffs are cold and melancholic, which adds to the over all desolate and rather hopeless atmosphere the album builds.

Admittedly though, it can be a little tiresome hearing the same droning riff go on for minutes on end. While its nice the first time, there's not much depth outside the atmosphere and general feeling of the album. Musically, its simplistic and straight to the point with very creative use of effects.

The atmosphere is the driving focus of the whole thing. The band wants the listener to truly stare into the abyss within them selves. The cold layered riffs and occasional melodies are simply the introspective voices that draw you in deeper and deeper into the darker parts of the psyche. What more is just how enormous the album feels. Only running for thirty-four minutes, it feels much longer, getting you into a deep sense of immersion especially at hell well the songs blend well into one another.

My favorite moment off of this album was towards the end of the last track. The fourth and final track Possessor of Rain and Sleepless Hurricanes, is possibly the loudest and nosiest off of the album. The guitars seem to come to their peak half way through and continue on as they devolve back into the static nihilism the album sounds, but comes to a sudden stop save for a lonesome guitar in the distance. Its haunting and tragically beautiful.

I've found my self really drawn to the album and enjoying my time with it very much. But it wouldn't be something I'd suggest to everyone. Its rather slow and steady pace may put some off and the more snobbish types may just find it boring. Personally, I thought it hit my niche rather well. Give it a shot if you'd like.