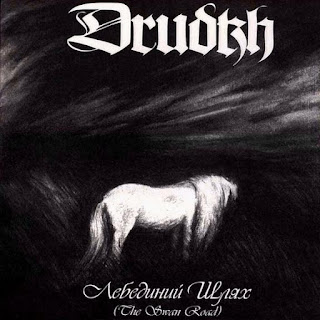 By this time everyone knows of the legendary Ukranian black metal band Drudkh. What with their wonderfully beautiful melodies and melancholic riffs that transport you back to a pre-modern time in the old forests and steppe lands of Ukraine. But there is one album in particular I wish to talk about and that is their third album The Swan Road. Squeezed between two of the bands most critically acclaimed releases, Autumn Aurora and Blood in Our Wells, its no wonder not many seem to remember, or even give credit to the one that passed the time between those two opuses. Its hard to compete with those two albums, but what you get here is a gem that I believe should receive more credit. The tracks on this are like a perfect stepping stone in between the two albums. You can tell that the band was still understanding who they were yet had a good grasp at what they wished to achieve. And what we get is an album I believe should receive just as much credit as their big two and is rather unique compared to the rest of their discography.

The droning guitars, rapid yet melodic drumming, and harsh vocals are all distinct and classically Drudkh. The folkish riffs and beautiful melodies are all apparent on this album just like the rest, but there's something more cold and desperate about these tracks. The vocals, to me at least, seemed more strained, reciting the old Taras Shevchenko poems in an almost pained cry for a time long gone. But it doesn't stop there, the droning and repeating guitar riffs and rapid yet melodic drumming that leads you into a hypnotic trance that is oh so distinct to this band, seem rather colder. An approach more familiar to me in Saenko's other band Hate Forest. This sort of approach is more apparent on tracks like Eternal Sun, and The Prince of Freedom. Even the slower and more down tempo moments on this album seem more sullen and mournful. Add on top of that the ever lasting fog of the droning guitars, it even makes the solos played by Saenko to feel distant. Something you're eternally chasing down by coming back to the songs again and again.

The album ends a very interesting note. A purely acoustic Ukrainian folk song. It is a vast and abrupt change of pace to the rest of the album, but a fitting and calming end to the bleak and depressive album this truly was. The acoustic guitar played a major role and keeping the roots and origins of the music alive in the sound, and made the down tempo parts sound more full. This album truly gave me sympathy for the truly dark history Ukraine has had, and made me heavily respect their culture and history. Not many albums have truly moved me emotionally like this one has. And that is saying a lot. Be sure to give this one another listen.