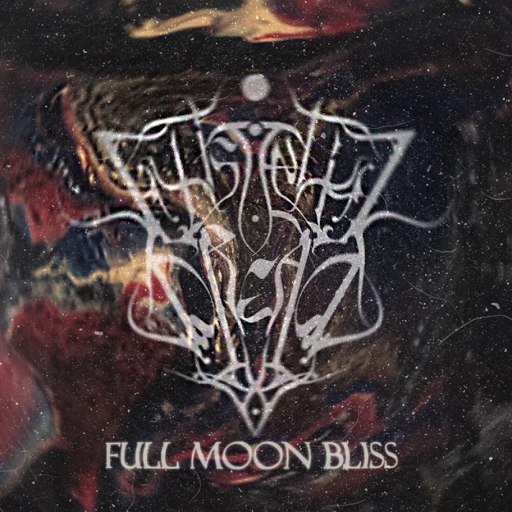 Being apart of the Moonlight Cypress Archetype label, Existential Dread falls into a certain uncategorical sound that is truly unique to the band at the label at hand as well. They all seem to be a very unique fusion of genres that typically wouldn't fit in a normal setting, but in the hands of a incredibly creative person here, you get some very unique sounding metal that stands out amongst the sea of endless music out there.

This album at hand though, Full Moon Bliss, is a slower, methodical, and thought provoking piece of art. With elements of free jazz, blue grass, doom and drone metal, you find a very unique and almost psychedelic quality to the music. Being able to be both dark, yet provide colorful tones and sounds with clean and what sounds like improvised guitar riffs strewn through out the album. They provide a great counter balance to the incredibly heavy and distorted guitar riffs that support the album all through out. The drumming is also nothing to scoff at, with great timing and interesting fills, it doesn't lack behind at all. While there are vocals on this album, they're really obscured and distorted, not a problem really as its not the main focus on the music compared more to the instrumentation, but they're a nice added touch to the general ethereal atmosphere this release provides.

There's not many tracks on the album, but each of them run for a decent amount of time, all, except for one, are over seven and a half minutes. Now, to some they might expect long droning noises and nothing creative, but that won't be the case here. Each track provides something different and interesting, while still being able to connect with one another flawlessly. The first two tracks especially blend seamlessly with one another, but can still stand on its own when played individually from one another. One of my favorite tracks off of this album though is the third one, Whites Creek Meditation. Its an acoustic track, and as someone who is a fan of folk, especially darker sounding folk, this is an amazing track. The guitar playing on it is incredibly beautiful, and really captures the local Tennessee environment the band hails from.

I view this album as being split in half, really. The first two tracks complimenting one another and being very similar in sort of structure and vibe, with the third acoustic track breaking up the album to the other half. The latter two tracks, The Sacred Sound and Full Moon Meditation are another two that pair nicely with one another. The Sacred Sound ends in a solo, distorted electric guitar and bleeds into the following Full Moon Meditation, that is exactly that. A meditation provided by a solo, heavily distorted electric guitar that reminds me a lot of the band drone/doom band Earth. The two meditation tracks are, in my opinion, the best of the album. Personally, I very much enjoy solo guitar playing with an atmospheric approach. Being able to play with the distortion and create music from the harsh tones and noises and create beautiful pieces of art is something not many have the ability to do well. They always seem to end up being incredibly muddy and not being able to pick out the notes, but, with the this Full Moon Meditation track, shoots right past that and the musicality truly shines here.

So far with my little dive into the Moonlight Cypress Archetypes has been very rewarding, and this album is really cool. So far probably my favorite I've heard from them. From the swirling guitars and psychedelic distortion, it leaves for a meditative and heavy album to dwell on. Highly recommend those who prefer things slow, yet harsh.