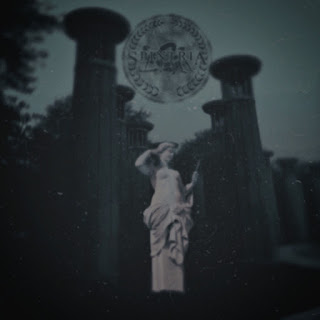 This is probably one of the most outlandish albums I've ever had the pleasure of listening to. Another addition to the Moonlight Cypress Archetypes label, Spintria, is a self proclaimed free jazz/improvised black metal fusion with heavy emphasis on drone, noise, and other chaotic tendencies. This album is not for the faint of heart, for metal heads and jazz freaks alike, but, its done a task that I thought would be near impossible to do and weirdly enough fuse these two sounds into one suffocating album.

The instrumentation across the board is incredibly tight and surprisingly on time, at least for those of the untrained ear. The drums on this album are truly something else. The manic fury at which the drums are being played is mind boggling, its able to keep the rest of the instrument line up in check, while at the same time being able to create such a loud and heavy noise that its physically moving. On top of that are the sounds of guitars and pianos battling each other. Keys and notes being thrown left to right, making it almost hard to really figure out what exactly is going on at times. But, certain passages do stick out. Like for example on the first track towards the five minute mark, the instrumentation starts slowing down and each instrument begins to rest. What we have left is the sounds of tribalistic drums being slammed on and the incredibly heavy and dark sounding guitar, which lasts for about a minute until it returns back into the chaos. And moments like that happen a lot on this album, where certain instruments take the forefront of the sound and grabs your attention the most. My personal favorite is the drum solo towards the nine minute mark. The speed and timing on the solo is simply incredible, you'd think someone playing this fast and hard would end up sounding incredibly sloppy, but quite the opposite. It sounds neat and methodical, almost as if it was planned out. But to my understanding this entire fourty-two minute album is all improvised.

What surprises me really is just how well each section flows into one another. While at one moment, the chaos makes things much too anxious on a dime it can switch to a much slower and thought out pace. Taking its time and building the atmosphere. And thankfully, the musicality of it all is not loss even in the noise. The sense of pace and timing is still very present, albeit, hard to read. Another interesting thought I've had with this album is that, while it sounds very organic and feels very human, it almost has a lack of emotion to it. The sense of focus and patience in the music is what dominates it all. Its just as much a meditative piece for the musicians as it is for the listener. They're stretching their skills to their maximum range, a good sense of discomfort as it also stretches the range for the listener as well. Making them go beyond what one is used to listening to in order to find and understand this really interesting and beautiful piece.

It is incredibly dense, and its hard to wrap my head around. But, that doesn't mean this shouldn't be something you should write off. In fact, I encourage everyone to give this one a listen. Its just far out enough where it becomes an incredibly subjective and individualistic album. Not one person is gonna think the same about this, but I know I'm going to be coming back over and over to this.