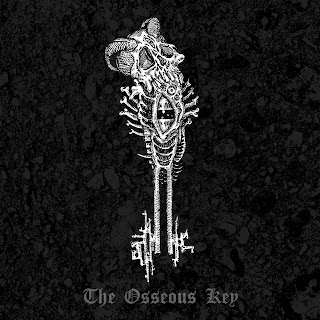 Hailing from Portland, Maine, the one man band Alghol presents us with his first offering, The Osseous Key a leap forward coming off of the back of his previous demo release Forgotten Paths. This debut album is very much in vein of the 90s style black metal, filled with raw melodic riffs, mystical synths, and an unforgiving attitude. A perfect mix of grim atmosphere and crushing riffs.

Right out the gate this album doesn't take any prisoners. The drums are fast paced blast beats with a nice strong tone but not too over powering. The guitar riffs are gnarly, cold, and electrifying, they're rather catchy as well, with a nice melodic groove that brings me back to bands like Burzum, Mayhem, Darkthrone, all of the classics really, but there's an obvious modern bent to it that is rather refreshing. Its not just another love letter to the past, but a look forward for black metal while still keeping it to its roots. Simplicity and minimalism is what makes black metal great in my opinion, and this album does that and still manages to sound full and very vibrant. The very melodic song writing helps as well, keeping it very entertaining. Each song can easily stand on its own.

The subtle keys all through out the album accompanying the riffs really helps along the atmosphere, keeping it mysterious and having a mystical and dark fantasy feel to it all. That's very prominent I feel on the title track for the album, the riffs are almost medieval and along side the keyboards you can't help but picture dark castles and hidden demons that lie within. What helps as well is the production, while not as raw and rugged as the demo release, this one is still rather intense. The guitars shriek with every riff and really takes over the whole song. The vocals also have echo effects on some of the songs, enhancing the rather mysterious vibe the whole album has.

There are some rather very clever drum fills that I think help separate its self from the droning blast beats. While, there are plenty of those, and they're very impressive and intense to listen to, the rather slower and melodic parts shine the most, and I think is the albums strongest suit. One of my favorite tracks is the fourth track, Tireless Procession. The drumming on that track is probably my favorite, it matches the pace of the guitar riff and makes for an almost militant sound to it all, adding to the grim nature of the album I think. What's great is that it changes up through out, with the double bass punishing all those who appose it towards the end.

This is a very well put together album and you can tell a lot of care and effort went into this release. It really gets me excited to hear what else can come from this man, because the potential to grow is very apparent in the music. This is just a very solid all around black metal album that I very much enjoyed and had a lot of fun listening too. Any fan of metal should check this album out with out hesitation.

GET THE ALBUM HERE AND SUPPORT THE ARTIST