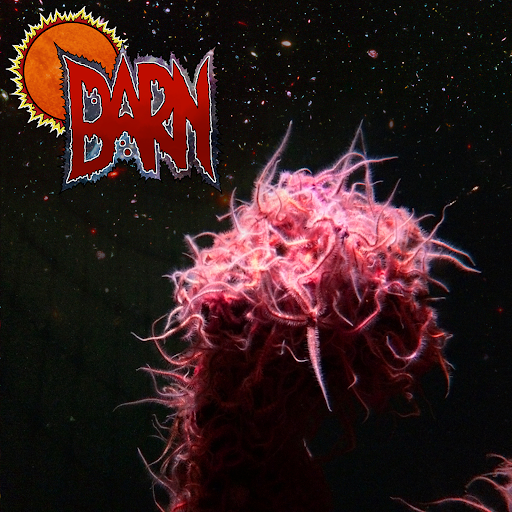 Brewing in the underground of Boise, Idaho comes the band Barn, a five-piece death metal band taking heavy influence from bands of the past. Combining the clean and creative riffs of Death, the jazz influence of Atheist, and the fury of Bolt Thrower, all complete in a tight and modern package that would make any old school death metal head turn their head in awe. With only one self titled full length release, these guys, despite being so young, have an already established footing within the Boise scene playing plenty of live shows and flexing their skills. Their YouTube page has plenty of videos of their live shows and they seem to thrive in a live setting.

Their live skills translate very well into a studio setting. The instruments are all tight and well performed, capturing the essence of their live performances very well. The production style is rugged and raw, with emphasis on the drums and bass, which are performed phenomenally. All through out are bass riffs and solos that help break up the guitar parts, which are just as good, if not better. The drums have this deep almost wooden sound to them, creating a great authentic effect to the sound that is missing in many modern death metal albums. There are also electronic drums spliced in here and there that add to the rather absurd and somewhat psychedelic atmosphere this album has. The guitars in certain tracks have swirling effects on them that gets the stoner in you head banging. Mixing that with the creative and very colorful guitar riffs and solos creates for a very vibrant listen. Its both dark and brooding, yet fun and lively a unique and very deadly mix.

The vocals are another key point in this album. There somewhere in between Chris Barnes of Cannibal Corpse and Chuck Schuldiner of Death. Brutal, deep, and bestial with creative lyrics that touch upon topics of philosophy, magic, death, and politics, it all comes from a genuine place of expression and adds a nice layer of depth to their music that is surprising with the rather formulaic rut that death metal has found its self in this day and age. Who knew that the fresher sounds that this band puts out comes from the older roots of the 90s, the creativity has more room to breathe once you strip back the overly produced sound.

Each track is rather progressive as well, with none of the albums being under three and a half minutes long, you'd think you'd get tired with longer tracks like these, thinking you'd find repetitive riffs and maybe endless blast beats. Not with Barn, each track have creative guitar pieces that are different from one another yet flow flawlessly into each other creating angular yet organic flow that show these guys skill off. The drums are my favorite as I've mentioned before, creative fills that are aggressive yet smooth and powerful bass drums that drive the music along and shake you to your core. Its always a surprise around each corner, you'll never get tired of the tracks really.

The very essence of death metal lies within the musicians and their instruments and these guys have nailed that down to a T. Probably one of my favorite albums I've heard in a long time and has really rekindled my love of death metal. I'd suggest for everyone to give this album a shot, fan of the genre or not, its worth to give these guys a listen because they really poured their soul into this release.