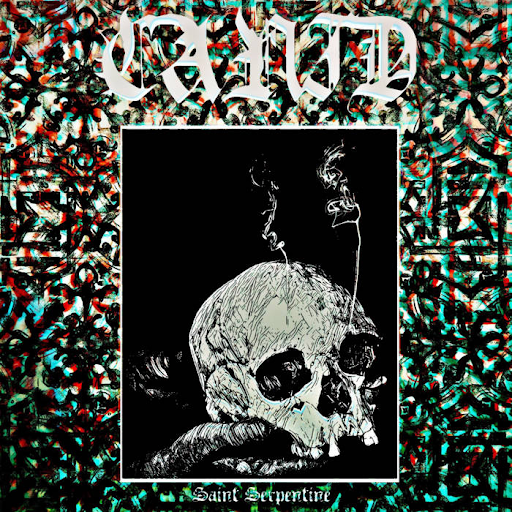 Crawling forth from the US underground scene Canid presents us with their third release after a four year hiatus titled Saint Serpentine. This is a cryptic, obscured and raw sounding black metal album that approaches you in a slow almost doom like pace. When looking back on the duo's previous releases, it keeps many of the same lo-fi and raw themes of misanthropy. Thick swirling synths that add layers of textures aren't as present on their latest release here, but its still very much there and one of the things I've found very alluring about this act. They also decided to slow down the pace, which is quite refreshing.

The riffs are thick and repetitive, getting into the doom metal aspects first. The riffs swirl round and round with the shuffling drum beat, which is my personal favorite. The drums on this album are almost hypnotic with how they're played. It really compliments the guitar riffs, which are layered on top of one another creating a very thick and noisy haze that makes the listener pay closer attention to it, at least in my opinion, to pick out what's being played here. For the most part, its a rather laid back album with very noisy tendencies. There are moments where it picks up pace and really sounds punishing, especially on the first track, about a quarter of the way towards the end, the double bass drums kick in and create a very driving and memorable force on the album. It doesn't happen much else through out the album, but its a nice touch compared to the rather psychedelic and rather hypnotic the riffs are.

There are some great and creative use of guitar feed back on this album, the third track Antediluvian Filth Eternal is a great example of such, the guitar riff starts and stops, and lets out electric shrills that'd wake the dead. It really helps captures a sense of chaotic and angry atmosphere and builds for a very memorable moment as well off the album.

The slower pace of these tracks I think help the album feel much longer than it actually is. Running for only thirty-four minutes, each track feels like a massive accomplishment after listening and almost requires a break due to the repetitive and sometimes hypnotic aspects of the songs, it honestly put me to sleep. Not saying that's a bad thing by any means, it has a way of absorbing you and really immersing you in its misanthropic nature. And even with saying that, there are still plenty of interesting and memorable moments, specifically the transitions in the songs them sells, switching from one riff to another tend to be done in a rather flashy and creative way.

I'd say give this album a shot if you enjoy your black metal to be slow. Just as slow as doom metal really. I found this album to be very entertaining and enjoyed my experience with it. Seems only right I tell others to as well.