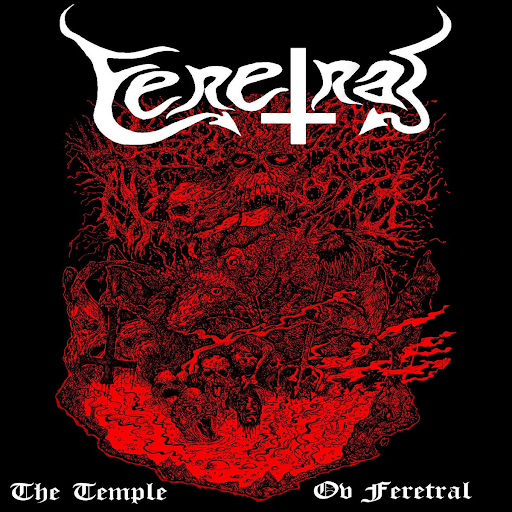 Hailing form the Brazilian underground Feretral pulls their latest release from the sewers of hell The Temple Ov Feretral. This is a thrashy, black metal album with some death metal elements thrown in for good measure. Its raw, gritty, and filled with plenty of headbangable moments. There's a lot of tracks off this album, seventeen of them, but it doesn't get tiring listening to them as each of the songs are rather different from one another, yet keeping to that original septic concept.

After the long gloomy intro, it kicks into an almost Blasphemy-esque thrash song. Jumpy blast beats, hellish vocals, and screeching guitar riffs, it really draws on the old school style black metal acts. I've found my self really drawn to this sound, it keeps it raw and rather authentic thanks to the muddy production style. It sounds rough and rather chaotic at first, but it really helps again with the entire atmosphere this album has.

But this album is not all atmosphere, there are some wicked riffs and solos that are really killer. From slower doomier riffs to lightning fast thrash riffs to a more standard black metal style, there's plenty of variety through out the album and it really keeps you engaged. Besides the guitars, the vocals are some of my favorite that I've heard in a long time. Its bestial and demonic, bringing me back to Blasphemy as I mentioned before. The added effects to the vocals also help add to the twisted and hellish atmosphere. He barks out lyrics regarding destroying society, demons, Satan, and your usual black metal contents but it fits even despite its cliché contents.

There are some really fun tracks on here, my personal favorite is the sixth track Sewer metal. Its a hard hitting black thrash metal track with catchy lyrics, killer drums, and an infectious riff that gets stuck in your head. Its just a fun song all around, chanting 'Sewer Metal!' along with the chorus is just infectious. It only runs for a little bit over two minutes, but it doesn't feel too short. It hits the sweet spot of being not to short and not to long, and that goes for the whole album. There are some tracks, like the one that follows The Masque of Red Death is a six and a half minute doom metal slog that, again,  doesn't feel like it over stays its welcome.

There are also two covers on this album one of Darkthrone and Sepultura. The Darkthrone cover of their song Transilvanian Hunger a black metal classic and done performed perfectly and thanks to the production, it has an almost thrashier feel to it. Its not as cold as the original but done really well. Same with the Sepultura cover, its a classic song they cover The Curse and again, its an almost perfect cover done with plenty of respect. The whole album, besides the covers, are all performed very well. These guys are skilled at what they do and have plenty of passion. They've for sure gained a new fan out of me.