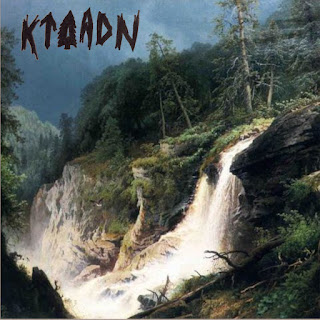 Hailing from New England comes Ktaadn, an atmospheric black metal band with folk influences and as described on their Bandcamp page they're 'dedicated to the natural beauty and history of its homeland, New England, and the preservation of the ancient ways of our European ancestors.' The unique fusion of European paganism and the natural beauty of New England I find is a fitting choice as much of the roots of many folklore tales come from European roots. Much of the album as well implements folkloric lyrics that help bring along the atmosphere which I find is the main focus of the album.

Instrumentally this album is phenomenal. While it is rather text-book black metal, it really is executed very well and with a lot of passion involved. Many of the riffs are just dripping with melancholic emotions and cold reverb. It helps get into a mind space of triumphant victory of conquering an untamed landscape while at the same time invoking a deep feeling of awe and respect. The guitars have a very cold and rigid tone to them, reminding me more of Marduk, especially thanks to the very melodic nature of the album as well. The drums, while they are programmed and personally I find it rather off putting a lot of the times, these were well done. They still have an almost natural feel to them, but what helps is just how cold they sound as well. You also won't find just blast beats here, as it changes up all through out and sticks to a rather mid-paced and melodic style. I found the vocals to be lacking though, buried very deep under the layers of sound, they can get lost in the mix, and makes me want to dive deeper in them more. This sadly effects one of the songs, The Green Mountaineer, which many of the lyrics are taken from a poem written in 1828 by John Greenleaf Whittier. Its a triumphant ballad that describes a period of Vermont deflecting land claims from other British colonies. The original is beautiful and well written, and the black metal take on it is a rather fitting combination that I'd never have expected.

While the album runs over a little bit over an hour, its long running time doesn't mean it gets tiring at all. Its actually very diverse, each track consisting of different parts, tempo changes, riff changes and drum fills that really keep you on your toes. Especially on the seventh track Berkanan, where it starts out as probably the heaviest and fastest song on the album with straight blast beats and a oppressive riff, it breaks up half way through into a soulful and ambient section where a bass solo ensues and the twinkling of a guitar is matched with it. It really caught me off guard but was a nice touch when it jumped back into the fast pace of the beginning.

As someone who enjoys folk music in all of its forms, this was an incredibly fun and powerful listen for me. The themes running through the album are some what unique for black metal. And the bitter sweet melodies performed all through out is just something that'll stick with me and really resonates with me down to the core, despite my ancestral background being vastly different from what the band speaks of. Still, I very much enjoyed it and I recommend others to give it a listen as well.