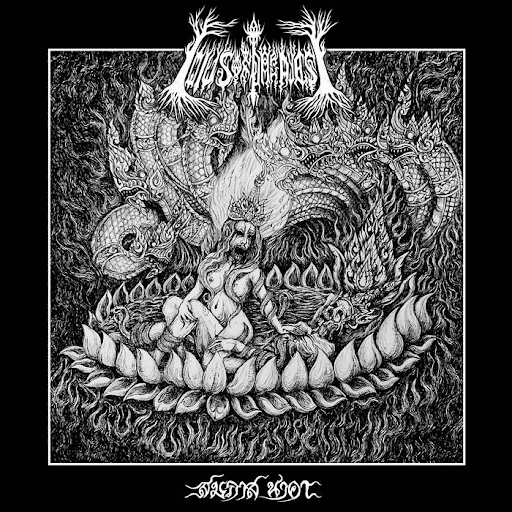 Hailing from the eastern underground Lotus of Darkness is the only black metal band I am aware of hailing from Thailand of all places. Their cultural roots show within their second release, Sompas-Naga, a mournful album deep in the black metal tradition. Though their folk roots flare, with eastern style guitars that are present all through out. It is quite the exotic album.

The songs are harsh, cold, and grim, very much in style of many of the old school European black metal bands reminding me somewhat of the many French style black metal bands that tend to stick to the more raw and stripped back approach even to the riffs. The guitars here have an almost skeletal sound to them, but many of the songs are incredibly melodic, having deep Asian influences as well. Its a surprising mix that is rather refreshing to hear. As well as the many Hindu and Buddhist themes presented all through out. The vocals are just as good as the guitars as well, harsh and visceral the high pitched screeches like that of a nāga its self.

The songs are rather lengthy, none of them even being under six minutes, but whats nice is that thanks to the creative influences the repetitive riffs don't really get as boring. It helps that the song structure is diverse and the drums aren't a consistent blast beat all through out. There are time changes and the pace can either be slow and thoughtful to aggressive and fast. The range of style these guys have is quite impressive. The third track To the River of Wishes is an acoustic folk. Its a breath taking piece that breaks up the harsh tone the rest of the album presents. The following track Sompas-Naga, though, jumps right back into the blast beats and melodic tremolo riffs, quite a jarring transition, but it works very well.

Its not often you hear about a black metal band coming from Asia, and its always surprising when you do. Its refreshing hearing their own cultural interpretations of something so raw and ambiguous and this album and band is a fine example of just that. Bringing the raw hatred of black metal and mixing it with their own cultures much like the Scandinavians did with theirs is a nice touch and creates for some stunning work. I personally found this album to be extremely enjoyable from front to back, and a great foray into Eastern black metal which will be something I know I will be looking into in the future.