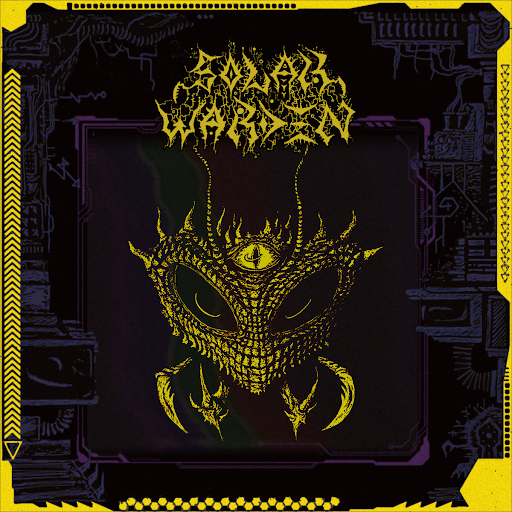 Crashing onto this Earth from the darkest parts of space, Solar Warden presents us with their self titled debut album of dark and cryptic origins. The harsh alien like noises help create a very industrial and futuristic aesthetic that is rather fresh for your typical Tolkien or history inspired black metal. This album is almost like being abducted by demonic aliens who experiment on your head.

Starting off from the first track harsh noise greets your ears and its a great way to set the stage. The whole album is incredibly noisy and turns the distortion up to ten. The guitars are tuned to a low and muddy tone and are layered very messily on top of one another but it adds to the suffocating and harsh atmosphere the album builds. The vocals have an added echo effect to them and are presented in a rather other worldly manner. There are also droning synths in the background that add drive home that space alien aesthetic.

The riffs are heavy. Almost war metal like. To me its a futuristic and industrial take on Blasphemy and its war metal counter parts. Endless blast beats with chuggy messy blackened death riffs its really infectious as it is monotonous. Its like almost like the Ross Bay Cult decided to pick up synths and throw it on top of their already noisy metal. It creates a very static and hectic mess that I can't really tell if I like or not. What keeps me hooked are the weird sci-fi themes and futuristic sounds and unique use of different effects that isn't very common with blackened death metal and its ilk, but I'm not sure if it really blows me away and truly impresses me with it.

Even after multiple listens I just felt it was a little lackluster, all theatrics and effects but very little to really sink your teeth into musically. At least with other war metal acts you get more diverse riffs and song writing but with this release in my opinion it gets lost in the layered effects. I still enjoyed this listen, and by all means its incredibly unique and rather fresh for the genre, but I just wish it would offer more than repetitive war metal riffs and layered synths. Not bad, but not too great. I was a little disappointed in it but there are still some cool moments to take away from this album and is worth a listen. Give it a shot if you enjoy the crazier war metal acts.