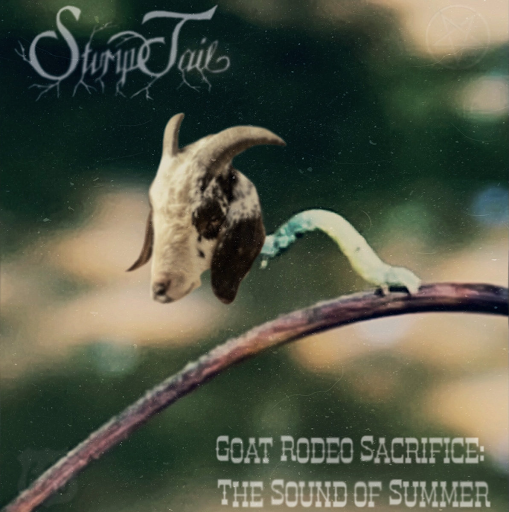 Coming from the prolific and chthonic Moonlight Cypress Archetypes comes StumpTail a demented fusion of Southern rock, doom, country, and black metal. Now, they may sound like a strange fusion, but these guys are able to create something incredibly unique and stands out among the rest of the label's releases, despite it having many similarities thanks to the guitarist, Ryan Clackner and his rather iconic guitar playing style. The drumming how ever, performed by Zac Ormeord is also something you shouldn't dismiss. He kills it with the precise yet incredibly fast paced and aggressive playing style. Really fits the rather aggressive atmosphere this whole album creates. The band was previously known as Stump Tail Dolly, releasing two EPs and a full length of a similar play style. They've since changed their name to simply be StumpTail and decided to get a bit more aggressive and darker with their music with their second full length LP Goat Rodeo Sacrifice: The Sound of Summer.

Immediately when starting the album you're hit with thick guitar tones and a sludge like pace that leads to, if I'm correct to say, a black metal styled country-rock guitar riff. Complete with blast beats and hellish vocals being barked out from the abyss. It just has that same progression as many country-rock songs. Its like what happens if Lynyrd Skynyrd decided to put on some corpse paint and throw some blast beats into the mix. It sounds like a joke, but it is executed flawlessly I think. My personal favorite off of the album is the third track It Ain't Right. A ballad that got mixed into some southern satanic goat cult. Completely with some heavy and iconic riffs and blast beats, and an almost sung/spoken word style vocals that really help mix in that folkloric aesthetic.

The album doesn't let up either, no room for resting at all here. Its fast pace can get a little exhausting if listening to it all the way through with no stops. Since I personally like to listen to an album front to back, I was both surprised with how well each song cleanly transitions into one another, but after fifty four minutes it can get a little draining. What helps it along though is just how diverse the sound is. The music is much more layered and pulls its influences from all across the musical spectrum, not just the ones I've already mentioned. There are some moments though that go full country, like on the track Father Sits High in the Sky breaking into a hoedown half way through a strange black metal track. Its both jarring, funny, and very cool.

What I love about this album is how it relates to the rest of the Moonlight Cypress Archetypes catalog. I feel as though its a great representation of the occult and dark nature of the old folk stories told in the deep south. It makes so much sense just how well the many folkloric and occult themes of black metal fits with the American south. I feel as though this album can sit nicely among the many old American tales that have been shared over the years and this has easily become one of my new favorites as of late. I think everyone should give this one a listen. Its just so unique that I think anyone could find something they like from it.

THE REST OF THE ARCHETYPES