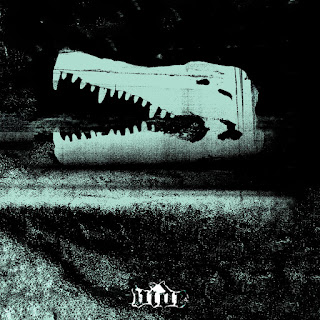 Coming out of the decrepit swamps of Louisiana, Vide, presents us with their second full length LP, Death Roll. This is a chaotic and dense album filled with twisted riffs, gloomy atmosphere and hazy synths that tie it all together. While yes it does fall into many of the same trappings of other 'lo-fi' black metal acts, it stands out thanks to its southern gothic aesthetic that is ever present all through out the album. The slower almost doom like pace of the album also helps cement this dark and moody atmosphere they're building up as well.

The instrumentation on this album is layered under thick lo-fi static, the drums are heavy and opposing while the guitars are airy and fog like, complementing them are the synths that swirl around in almost horror movie like fashion. The songs transition well from one another, creating an almost seamless experience that are only broken up with brief moments of silence and a couple of ambient parts that keep the nerves cold. The vocals are your standard lo-fi black metal affair. Dissonant and obscured, they're a nice added touch to the atmosphere as well. While I do wish they presented a bit more musically, its the rather cut throat and primitive nature of this album that really stuck with me. There's not much in the way of added fluff to these songs. They're just fueled by anger with aggressive and rather depressive riffs mixed with the very aggressive vocals barked out at you it really adds a layer of dread to the whole thing that really keeps you hooked in.

A good example of the primitiveness of the album is the third track White Noise in a sea of corpse paint. Its a rather text book black metal song with some punkish elements. Blast beats, repetitive riffs and the high pitched vocals. Its all the formula for a regular old black metal track, but the thick layer of distortion and the way the song breaks up to let the bass have some room to breath, its a great and honestly very punishing performance. The song doesn't change that much all through out, but it really keeps you hooked in with its dreadful atmosphere. Thankfully its broken up with the following track Prayers, a simple and eerie ambient synth track sounds like it could be lifted from a horror movie soundtrack, except for the added cloud of distortion that envelops it and takes you to the track that follows, which is a nice touch I find.

What's great is how there's so much to unpackage with this album as well. Don't expect to get a full experience with just once listen, this is something that requires multiple play through I think to full appreciate what's going on. What I like is how much the tempo changes all through out, it almost takes on different stylistic forms in a distorted and unique way that really drives you for more. I think this band has a lot of potential going forward and I found my self finding my self really interested in this album. Give it a listen if you haven't already.

GET THE ALBUM AND SUPPORT THE ARTIST HERE