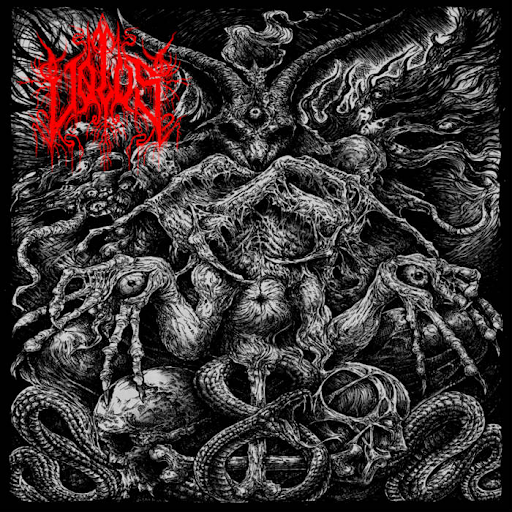 Vølus is a one man blackened death metal act hailing from South Carolina. The sole member, Justin Vølus, presents us with this first unholy offering titled Festering Anti-Cosmic Wound a torturous and gnarly twenty-seven minutes. Somewhere in between Portal's Lovecraftian themes and Cattle Decapitation's more grindier tendencies, its a very brutal and oppressive mixture of both the black and death metal genres and is executed rather creatively.

The guitars and bass are everywhere, the riffs are wailing fast and deep, the bass is simply crushing it along side the guitars. The wild mixtures of the two reminds me very much of Portal's more spastic and rather angular sounding guitar riffs that are tuned way down, really pushing in that heavy feeling of dread. Providing the drums is Jared Cave Moran sitting in for this session. And he nails it as well, incredibly fast and on point, the performance is other worldly and at times feels like he's improvising much of it. It helps add to the chaotic and suffocating atmosphere the album builds.

Now, let me get started on the vocals. Justin completely kills it, mimicking what could be that of some anti-cosmic demon. Deep and guttural it sounds rather disgusting at some points (in a good way). The lyrics are rather dark as well, imagery of the occult, madness, and hordes of angelic corruption, are just some of the twisted topics this release touches upon. I also find it fitting as to how they're delivered in an almost spoken word style, it helps with the almost anti-melodic nature of this release.

Its a rather abrupt album I feel. It starts rather suddenly with constantly changing riffs and drum fills that make it seem very angular and anxious. I feel like it borders on the experimental and takes more influence from things on the outside of black/death metal. Dipping its toes into more noisy and even like a weird, twisted, heavy version of improvised jazz thanks to the drumming style. Either way this was a really fascinating album I thought and enjoyed my time with it. Though, I think its best suited for those already comfortable and familiar with crazier styles of metal.