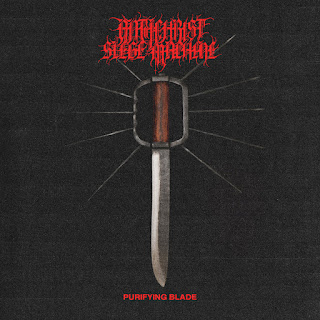 Hailing from the hellish Richmond, Virginia underground comes the second bombing of Antichrist Siege Machine titled Purifying Bade. If you're familiar with acts like Revenge, Black Witchery, Blasphemy, Conqueror and all the other bands who take up the moniker 'war-metal' then this should be something up your alley. These guys are pushing forward that iconic sound into the modern age, creating fresh riffs and taking more influence from the death metal side of things.

The album opens with a eerie sample explaining the Way of Cain, as the track is called. Afterwards is an onslaught of blast beats, destructive riffs and hellish vocals that differ from their previous release, Schism Prepetration which sported more traditional, deep and guttural death metal vocals in turn the vocals on this release are a bit higher and raspier, giving a more bestial bent to it that is just filled with anger and vitriol either way. The riffs are just copies of previous acts that a lot of these war metal acts sadly fall under. They create unique riffs that are just pure carnage and crush any that oppose it with its deep and heavy tone.

The production is a perfect balance between raw and clean. Its not demo quality, but it still has a live studio feel to it, as if they were all in the same studio hammering away at it. The guitars and bass don't drown each other out and have a symbiosis in the production, its not a muddy mess, but a rigid and focused fuel for war. Its a refreshing pace to the lofi (but admittedly a favorite sound of mine) sludge fest that a lot of war metal acts become, sometimes even bordering on the edge of grindcore. To me this album is a perfect fusion of death and black metal in the modern day, and should honestly be referenced just as much as the acts from the 90s do. Picking up the mantel so to speak.

Its a short run through the album, clocking in at 29 minutes, but it feels much more massive than it is. It makes its presence known and will be embedded in your head much like a bullet would. I've found my self playing this over and over again and have found so much little moments crammed into such a small amount of time. One of my favorite moments was the ending of the album. The track The Inevitable Penalty starts out focused, with intense militant blast beats and an incredibly furious riff. But the track soon fades into madness and chaos, the riffs and drums becoming more and more chaotic and hectic ending in a cataclysmic hail of noise.

This is a wicked album that has quickly become one I love. This hits all of the war metal sounds with ease and skill and helps push the sound forward. This is a must listen for those who are fans of the Ross Bay Cult sound, that's for sure.