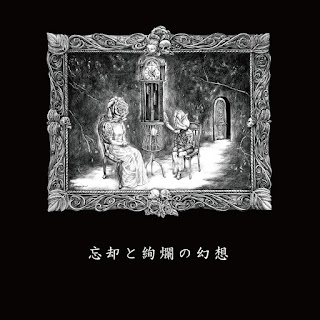 Hailing from the far east, the land of the rising sun, Dark Fog Eruption presents their second ritual offering, 忘却と絢爛の幻想. I personally don't know Japanese, but according to online translators it roughly translates to 'Oblivion and Gorgeous Illusion'. This is an ethereal and atmospheric album with misty lofi production that helps create a rather mysterious nature to the whole album. There is no doubt that the Japanese take their metal seriously, and this is no exception to that.

The album begins with a noise start, piercing you with the feed back of guitars. You'll hear the music actually kick in, the first thing I noticed was how muddled the drums were. Thanks to the lofi style of recording, it creates a unique effect on the instrumentation which has an almost fog or haze like effect to it. The first track is interesting as its fairly consistent all the way through until about half way when the drummer adds a little bit of flare to the ride and the tempo changes. Its clever and really gnarly sounding. The rest of the album has many moments like this all through out. Plenty of tempo changes and melody changes to really keep the long running time for these tracks diverse.

The guitars all through out the album have consistent, cold, and raw style black metal riffs. The bass and the drums seem to have a bit more of a prominent sound and they're just all simply performed flawlessly guitars included. The vocals are deep and guttural. As if coming from the throat of a corpse, they're dreadfully haunting and dripping with wicked intent. It pushes the atmosphere further and really immerses you more into the album I feel. The over all feel of the album its self is rather oppressive. Some of the titles are in English, but the lyrics are in Japanese and are rather hard to make out none the less. With titles like Eternal Nightmare, Lunatic Romance, Intoxication, and The Huge Old Pendulum Clock, lets the imagination wonder what story is being told here, if any.

I've found this to be a great listen and one that I think I'll be having on repeat. There's a lot to unpack and its a slow burn to start, not going to lie at all. But once you get into it and really immerse yourself in the darkness, it envelopes you in its warm embrace and things start to make sense.