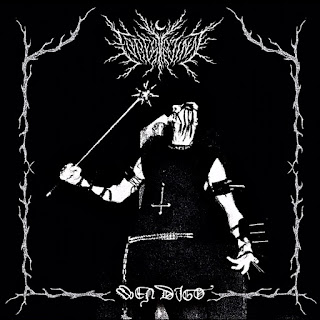 Hailing from the mountains of Appalachia, Forest of Jinn releases their debut album Wendigo. This is a rather raw and straight forward black metal release. It has a lot of your typical trappings of a black metal album, but, these guys don't just copy and past from other bands from the past. They wear their influences on their sleeves, sure, but they're able to create their own unique sound that is rather fun and quirky as much as it is hateful and rather dark.

The sound of this album is raw and jagged. Ear piercing electric guitars running along side a deep and rumbling bass and some rather laid back drums, it creates for a simple yet neat sound that is very reminiscent to many second-wave black metal bands. Luckily they're not lazy and simply lift some riffs from others, and are able to create some chunky and hard hitting riffs that are rather addicting to hear. Especially the track Fuck off, End it. Its a blend between punk and black metal that is just pure hatred for the world in the lyrics. The riff is simplistic, but whats cool is how there's a clean guitar part towards the end of the song. The transition from the harsh distortion to the clean riffs are done really well, and I find are complimented by the guttural and almost Inquisition style vocals.

The tracks are heavy on the lyrics, which I find to be rather entertaining. Its your usual sorta approach to black metal lyrics, Satan, misanthropy, possessions and the occult, but its done in an almost punk style approach with a catchy hook that gets stuck in your head. As mentioned before, the track Fuck off, End it has been stuck in my head since the album came out. The track Skurdeild, is another one with some rather catchy hooks that just get drilled into your head.

They also did a very well performed cover of the self titled Carpathian Forest track. They're able to put their own flare onto it while keeping the original sound idea and sound alive in their performance. That band's influence is also very clear all through out, as well as other second-wave bands like Satyricon, 1349, and early Darkthrone as some clear influences on the sound for sure.

While the album isn't really ground breaking in the genre, it really is a great homage though to the past. Its simplistic yet punk atmosphere is able to create a very cold and wicked atmosphere that really possesses the listener to hear it through fully. I found my self enjoying this, and would recommend to any fan of traditional black metal that's for sure.