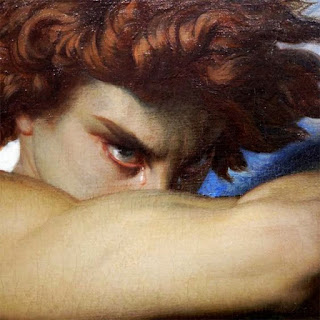 This mysterious act coming out of Florida brings us their second release titled Samael. This is coming off of the back of their first album Apparition, which are both very similar yet distinct in their own way and compliment each other very well when played back to back as if being told a story. A beautiful and creative fusion of black metal and doom creating a vivid musical painting. The album cover, being the famous painting The Fallen Angel by Alexandre Cabanel is a perfect fit for this album, and was what drew me into it for the first place. The lyrical contents are also rather deep and contemplative, clearly a lot of effort and love went into this project and it shows very well.

The album greets you with its ethereal guitars and hazy riffs that encompass your thoughts and has a deep melancholic atmosphere that lasts all through out. The drums are deep and booming, and performed flawlessly. Honestly, this album in general is rather flawless in my opinion. Really, I can easily compare it to later Deathspell Omega albums, but I feel like that doesn't do it enough justice, seeing as how stylistically unique this band is compared to Deathspell or other similar 'avant-garde' or more progressive black metal acts. They're able to take the biblical imagery used in the lyrics and are able to transfer it sonically through the instrumentation almost perfectly I find.

You can easily break this album up into two halves, the break point being the fourth track Soli Umbra a hauntingly beautiful ambient piece that connects both side rather well. The first three tracks, all titled after characters from the bible or other such biblical stories, all of them having a sound that relates to the character rather well I find. A good example is the track Cain, with its furious opening thanks to the deep sounding drums and the hellish and powerful guitar riffs, it slowly progresses into a much slower pace, almost matching the pace of the story of Cain him self who slew his brother Abel. Its probably the heaviest on the album, and rightfully so thanks to the imagery at hand.

The second half of the album, helps bring it to a close. One track being titled Bellum, war in Latin, is a beautiful example of the steps toward the end. The guitar work I feel like is the strongest on this track, with unique and wild sounding riffs that are played with such emotion, it comes across as very fleshed out and been wanting to come out for some time now I think. The lyrics are the harsh realities of war, rather simple topic, yes, but the imagery and the way they're written are simply beautiful and are only complimented by the instrumentation its self. The following tracks, Tartarus and Lamentations, help wrap up this tragic story of death and war with stark lyrics revolving around the decent into the abyss.

There were so many moments through out this album that really blew me away. I was a bit hesitant at first. Not really expecting much coming from this rather unknown and mysterious act, but it hit me about half way through just how beautiful and well written this album is. These guys are truly masters at their craft and they simply killed it with this release. I'd highly recommend listening to their first album Apparition along side this release Samael. They compliment each other and I think, when played together back to back, create a black metal equivalent to a biblical painting from the 17th century.