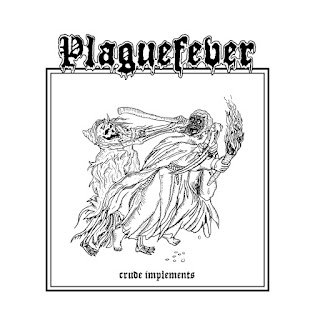 Hailing from Richmond, Virginia, comes the debut of a hellish underground black metal band Plaguefever, titled Crude Implements. Its a gnarly and grimy album combining the likes of black metal, thrash, and good ol' rock to create an addicting and fresh sound that is still able to sound old school.

After being greeted by a cryptic and unnerving intro, it bursts right into it, with a hellish thrash drum beat, wicked guitar riffs, and bestial vocals that come together near perfectly I feel. Much of the sound and feel of the album I believe are inspired by the likes of Darkthrone, with the instrumentation having a similar fusion of different metal genres but with a black metal bent to them. Certain tracks like Toppling the Ikons are slowed down to a doom like pace, while other tracks like Haunt You! Speed on by. It really helps keep the sound diverse and shows the range and skill these guys have with out sacrificing the initial image and theme they're going for here.

The production is hitting that sweet spot of gritty and lo-fi, but clean and high quality. The guitars have a solid weight to them and have just a mean crunchy sound to them. The drums are almost cave like, having a slight echo on them that, usually would help drown out the sounds but, on the contrary they're just as upfront and in your face as the guitars and bass. My favorite are the vocals. Its harsh, bestial and angry all the way through. The lyrics are fun as well, albeit your typical black-thrash contents, praising Satan, tearing down the false Christian idol, death and plagues. While, one may roll their eyes, they seem to be able to make it not as cliche as it initially sounds. It just really keeps the atmosphere going and is just a perfect fit. I couldn't picture them having it any other way.

The creativity and diversity of sound is on full display with this album. These guys are pouring them selves into this, and clearly took a lot of time and care to piece this rather short album together. Only running for about thirty-four minutes, it sounds much larger and longer than it really does. They're able to show their full range of skills in such a compact way that really blows me away, and I've found my self repeating multiple tracks over and over again. One of my favorites being We Keep the Pit, the last track of the album and the longest. Its a gritty and dark track that switched from a slower to a mid pace and is just filled with little unique drum fills and guitar licks that. There are parts I didn't catch the first time but going over again and again, little details shoot out and really make me fall in love with the album even more. The same goes for the rest of the tracks as well, there are little details that may pass you by the first time, so a second and even third listen is suggested.

In my opinion, this is how a debut album should sound from a band if they're serious about what they're doing. Not only is this extremely well put together and care was clearly poured into this, but its a great display of the range of skill these guys have to offer, and really makes me want more from these guys. Real wicked stuff that I think everyone should give a very solid listen.