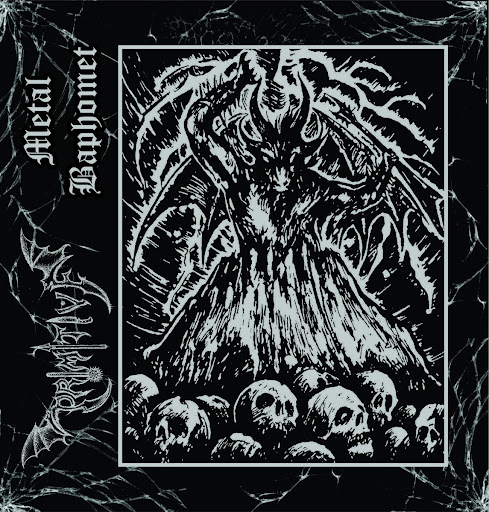 Another hellish release from under the Murder Records banner comes Primitive with their second ritual offering Metal Baphomet. This album is a monument in dedication to all things old and, well, primitive, when it comes to metal. Taking direct influence from Bathory, Hellhammer, Venom, Celtic Frost and others who toe the line between thrash and black metal. It only makes sense that this band comes from Brazil, which is home to many black thrash projects. But I think these guys stand out among the black sea of bands that reside there. I feel like they really distilled it down to the pure primitive (no pun intended) essence of the sound and are still able to add their own personal flare.

Jumping straight into it, I'll be honest. You're not gonna be extremely blown away by any crazy guitar solos, or overly complicated drum fills or anything of that nature. What you're getting here is no nonsense black-thrash that keeps it simple and to the point. There are twelve tracks, not counting the intro and outro tracks which are simply ambient pieces, that are filled to the brim with some ass kicking guitar riffs that are extremely catchy. Each song on its own is a strong contender and is only complimented by the fact that each track can flow so well into each other with out it being a jarring change. Honestly, just letting this play from front and leaving it on in the background is really the best way to enjoy this album. Its got a up beat yet dark sense of atmosphere that gets the head banging and the toe tapping. Personally, I have no complaints about the sound what so ever. The production is both clean and crisp, yet twisted and dirty. Giving the guitars a very filthy sound to them while not compromising the pure sound of the guitar its self I find.

I fucking love the vocals on this album. While each of the three members participate in the vocals, mainly the background vocals. The main vocalist, who goes by Oldskull, has such a unique and honestly surprising style to his performance. He goes for the high pitched screams for the most part, not to different from power metal acts, but it sounds so wicked! There's an almost howling wolf like feel to it all, or a banshee crying out in the night. I find it rather iconic, and helps them stand out among the sea of black thrash bands that come out of Brazil I find. There are more guttural and harsher vocals that come across more coarse. They can be very diverse even within the short running times of the tracks them selves. One moment he can go from your typical black metal style grunts and harsh voice, to a high pitched thrash metal scream to a more punk style spoken performance almost. Its diverse, and I'm not gonna lie I was smiling all the way through when listening to this guy go off.

I found my self to enjoy this album a lot. I'm not gonna lie and tell you this is ground breaking stuff here. It really isn't. But, they don't need to break any ground. They're masters of the old school sound, and are able to revive it with their necromantic music. If you're a fan of more simplistic and old school metal this is probably some of the better stuff you'll find out there. Looking forward to see what else these guys put out in the future. For now this is going on repeat.