Death's Eminence - In a Hideous Dream Made True 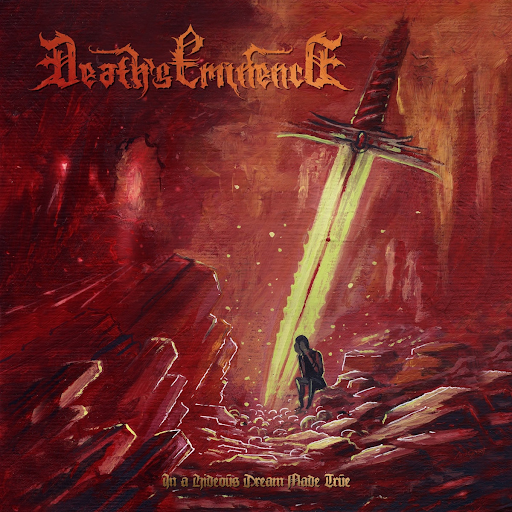 This is the third release from this California based tech-death metal band called In a Hideous Dream Made True. This is a compact and rather laid back album, with some high quality production and dissonant guitar riffs complimented by just as equally dissonant drum patters, that at first leave you a bit dizzy. But don't be dissuaded from listening to the rest of the album, because giving it a closer listen reveals the cleverness and the impeccable technique these guys have in their release.

Each track seems to flow from one to another seamlessly, weaving together interesting and mind twisting guitar parts with complicated and powerful drums that both compliment each other yet battle each other at times. The vocals on the other hand I feel could've been used better. The guttural style seems to have been a little too quiet and drowned out under the instrumentation, which really drives the music forward mainly. The twisted passages each track takes feel like a long stretch, having a sense that it goes on forever, but the album isn't terribly long, only running for thirty-six minutes, and really packing in a lot into this time space. I think it helps, since you're not left bored and each song feels complete and can stand alone on its own, while at the same time being able to flow seamlessly from one track to the next.

I truly enjoyed the drumming on this album, they're chaotic, hypnotic, and all together just awesome. I think there's something about the sound of the snare that really drives this sense of dread that is almost underlying within the theme of this album. The guitars on the other hand, while are performed really well, I feel like can be a bit dizzying at times. There are moments where guitars layer over each other, creating cascading notes that almost has me rewind the song at times just so I can everything that's being played. I just think, though, that might be a personal bias since I don't have the best ear for piecing out guitars, but, its really well performed and when put together is an impressive listen. The lyrics are really dark as well. Morbid tales of war, nightmares, blood, and death are littered through out, and I wish could be heard a bit more within the production. But, the instruments just really over power it all.

I had a good time listening to this. Took me many listens to really piece out each song and figure out what's going on, but this is someone who's used to the more simplistic and raw style of black metal. What this album does provide though is a unique sound that is distinctly theirs and can really make some impressive work. Will be looking forward to listening to their previous releases and what ever else they got next.