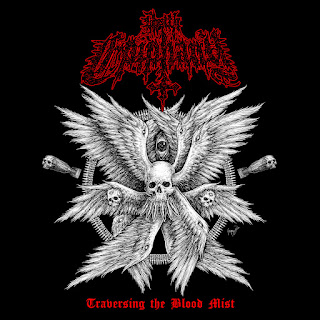 Bursting from from the Swedish underground Death's Epiphany presents us with their first declaration of war. This intensely brutal and hard hitting war metal EP is a short yet impactful release that leaves the listener whiplashed and dazed from this hellish performance. All what makes for a familiar war metal release is there. The incredibly down-tuned and chugging guitar riffs, destructive blast beats and vitriolic vocals that spew hatred and war out onto the listener. This hits all the right notes for me personally, I knew from the first track I'd fall in love with this message of hate.

The production first of all, is rather good quality. Still keeping it raw and distilled yet having a vibrancy to the guitars and really giving a life and a deepness to the bass drums. There are your familiar token war metal guitar riffs and hellish guitar slides that screech out like a minion of hell, but what's cool and distinctive about this release are the more melodic and more mid-tempo moments that doesn't just make this a pure chaotic assault onto the ears like typical war metal releases. You can say there's more of a death metal influence above all else with this release but still, owning the title of war metal like none other.

It very much reminds me of a more melodic version of Diocletian or a more compact Teitanblood, the influence is very clear. But, they're able to really stand on their own. I think the track that really shines the most out of the four on this EP is the third track Militarized Apocalypse Invocation. This is a perfect example of the range that this band has within this rather predefined genre. They're able to have the intense and crushing, militant style playing in the beginning while it transforms into more melodic and mid-paced tracks with memorable riffs and just a grim delivery of the vocals. If there can be just one track to walk away with it'd be this one for sure.

All in all this was a short yet impactful release that I very much enjoyed hearing, and will be looking forward when the call to war is rang again and a full length album is released from these guys. Til then, give it a listen, it's worth your while.

Also can be found where ever one can stream music.