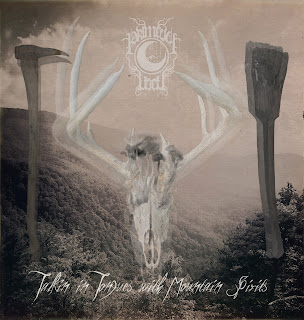 Making waves across the underground, Primeval Well presents us with their second offering to the mountain gods. Talkin' in Tongues with Mountain Spirits is a beautifully written and thoughtful album that really digs deep into the roots of the mystical and rather pagan nature of American folklore. Its sound is a clever and wonderful mixture of black metal, Appalachian folk and bluegrass all mixed into one twisted package. Coming off of their first self titled album, this feels like a more cohesive and completed release. While the first album was good, it almost felt more like a demo. Having just the concepts. But with this release it really comes together, creating a very memorable listen.

If you're even somewhat familiar with the effects of psilocybin and its sometimes rather spiritual or metaphysical effects, then the first track, Psilocybin Psychosis by the Mountain Top Cross, might seem rather familiar to you. The dissonant chanting and hazy production of the effects really feels like a beginning of a trip, with some sort of mountain hermit leading you through it. The following tracks are visions of that said trip, mixing some phenomenal guitar work that is expecting coming out of the Moonlight Cypress Archetypes label, as well as the phenomenal drum work that play out in a range of different styles that match the energy the guitars and vocals put out as well. Going from cold, atmospheric black metal blast beats to country or bluegrass style playing in a seamless way that really cements the folkloric roots this album takes. The hazy guitar production and dissonant riffs help push an almost psychedelic atmosphere, really taking you into a trance like state as this album plays out. The vocals as well have a bit of a range to them, some tracks having harsh and guttural delivery especially on the faster, heavier tracks. But then you also have a more folk sounding bellow, almost like that same mountain hermit mentioned before, keeping your mind occupied with songs of natural mysticism as your psyche leaves you and the music takes over.

I've really found my self drawn to this album, it pushed its way to the top of the list out of this years releases for me and I just find the fusion of genres performed to perfection. As well as the themes that I feel like aren't explored enough in black metal, or metal in general. The usual run of Nordic themes or satanic imagery is fine and dandy, but its not like those same people of Nordic and Germanic descent didn't lose their culture when coming over to the new world. It simply adapted with their land and environment, and I think this album really nails that down and captures the unique and often times dark culture of the Appalachian mountain folk. Tales of mountain spirits, witches, and strange psychoactive poultices are a perfect fit for black metal and its ilk. I think everyone should give this a listen, less you want a hex put upon you and your children.