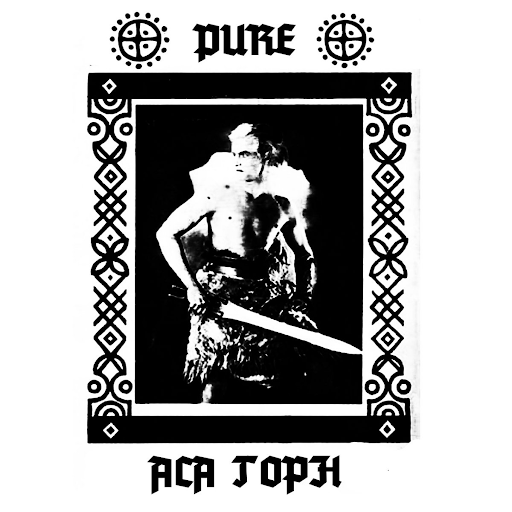 Nothing warms my cold soul more than black metal from eastern Europe. Pure an underground Russian black metal act presents us with their third offering Аса Горн, a cold and raw release with harsh riffs and lofi splendor that appeals to everything that I find right about black metal and this type of music in general.

This isn't a terribly long release, making its presence only known for just under about a twenty minute running time, but it doesn't mean that this album will slip you by. Its massive with its sound, despite the lofi nature of the release. The guitars are very present, the harsh guitar tone and the simplistic yet repetitive riffs are done well, and written in a way where it doesn't get tiring or drones or for too long. The drums are also a huge help to this as well. Having an almost punk like feel to them, they can range from blast beats to punk style d-beat that really gets the head banging. On top of that are some slight folk moments, especially on the last track, where there are some added synths and interesting melodic moments that really gets the blood moving.

I've found the guitar riffs to be extremely infectious, getting stuck in my head looping around over and over, and really draws me back to relisten to this album again and again. Another one of my favorite parts of this album are the vocal delivery being barked out to the listener in such a harsh and nihilistic way. There are moments in this release that have some almost folk like tendencies, which makes sense given the pagan like aesthetic the cover has. I'm sure the lyrics would hold some truth to that, but given how I can't read Cyrillic, I'm sure others would have a much easier time piecing that together.

The more upbeat punk moments as well is a nice change of pace from the usual bleak lofi black metal that is released now a days. Its not extremely twitchy and doesn't go at a heart pounding pace, but a more focused and at times almost laid back pace that really helps push along the melodic nature of this release. It also makes for an easier time listening as well, being able to be thrown on in the background or something to focus on and really appreciate the rocking nature of it. All in all this is a very solid release and will definitely be looking at their previous releases.