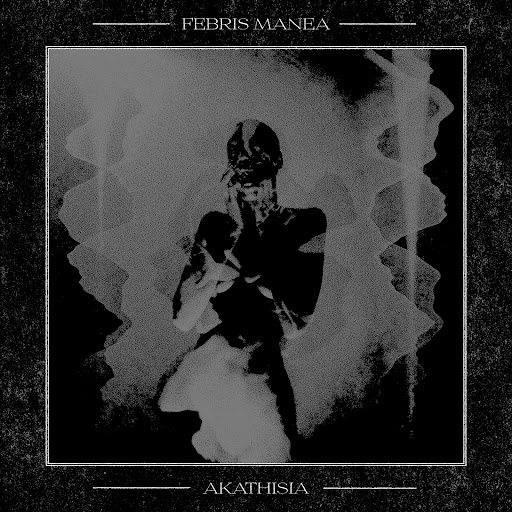 Spewing forth from the US underground scene Febris Manea is making waves yet again with another offering of audio-terror titled Akathisia. A name that certainly fits with the music at hand. Frantic, panicked and never staying still, you'll be caught in a torrent of pure unadulterated hatred that leaves for quite the experience.

Right off the bat, the first thing I've noticed is how top notch the production style is compared to even the previous release of the year Through Pale Opulence Thy Reign is Doomed. Its still harsh and lofi, creating that familiar yet suffocating atmosphere of before, but the guitars seem more vibrant, allowing for melodic moments here and there to lure you in to a false sense of safety. The drums fit perfectly with the music at hand. Hypnotic, intense and industrial, it really cements the cold and unforgiving nature this album exudes.

The vocals have always been my favorite from this act. Its visceral, intense, and filled with deep emotion. Its almost cathartic at times, being able to release all that emotion and energy into the music and extend it to the listener is something that I've always been drawn to as its almost a release for them as well. What the lyrics contain doesn't really matter as the rest of the instrumentation is explanation enough.

I wouldn't simply slap a label of 'DSBM' on this album and move along. Febris Manea is able to really push past that and create his own unique sound that is a mixture of some of the greatest of that sub-genre. Its what happens when one mixes the melancholy of Xasthur, the rage of Leviathan and the twisted and psychopathic nature of Endless Dismal Moan to create something that really leaves one unnerved. Especially the samples of terrorist executions, murders, and much else that almost makes those other bands seem like Lord of the Rings in comparison. Its one thing to walk the line of fantasy and dance around the dark nature of humanity, than it is to stare it dead in the face and greet it with open arms.

This has easily been one of Febris Manea's best releases to date. This release, even being released so late into the year, it has easily become one of the best I've heard. Its incredibly unique stylistically and I think will truly stand the test of the time. There aren't other bands out there that sound quite like this and really crushes other bands under its immense sound. This is a must listen for those willing to take a dive into the deep end.