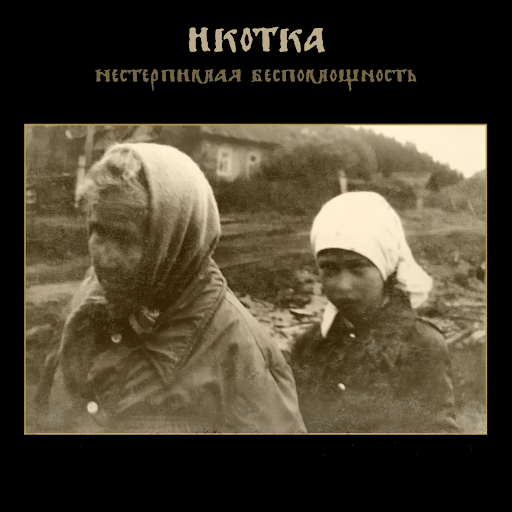 Hailing from the cold wilderness of Russia, Икотка (or Ikotka in English.) a three piece black metal act presents us with their latest offering, Нестерпимая Беспомощност. This is their sixth EP, a somber, cold and very dissonant release with ear grating guitars, cold atmosphere and a deeply melancholic emotion that is just extremely fitting for the themes of the band. Ikotka gets their name from an old northern Russian folk tale of a demon who takes control of the host, living inside of men and women for years controlling every aspect of their life. There is something almost possessive about this band. Its music hypnotizing you into a trance thanks to the hazy production and repetitive riffs that stay surprisingly fresh for how long the tracks run.

Being a little over twenty minutes this isn't a very long release, but can easily be paired with previous EP releases. All of them have this deep sense of Russian nostalgia or melancholy that is reflected through the old photographs used as cover art. Personally, I feel as though the music its self can establish the context of the photos, giving them a story all on its own.

As for the music its self, its rather straight forward mid-paced atmospheric black metal with raw lofi production and heavy on the atmosphere. The guitars are layered ontop of one another, creating an incredibly thick instrumental haze that makes it hard for the vocals and the drums to bleed through. But, personally I find it fitting for the theme the band is going for. The distortion taking over the music much like the Ikotka demon its self, where you're not sure if its the drums or the guitar its self that's driving the music forward. Either way, it creates for a rather unique and a little bit of a psychedelic experience in a way.

What's really interesting are the lyrics. The band provided both the original Russian version and an English translation of the lyrics. They're incredibly heavy, depicting the darker side of human emotions and almost lamenting on the tragic past of Russian history. The second track Сеять Новую Злость (To Sow New Anger) is a great example of just that, expressing a new found anger for the empty vows promised to you. While that may be my personal interpretation, I find that they're very fitting.

This was rather a surprise for me, after hearing this EP I went back to listen to the rest of the band's catalog and was not disappointed one bit. Each release has its own style and production, but still keeps the raw cold atmosphere that I believe was intended from the start. This release is simply a conformation of what they're doing and a promise I hope of more to come from the band. Highly recommend this to those who're fans of raw black metal.