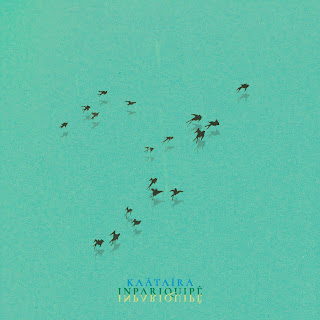 From deep within the Amazon comes Kaatayra, a one man black metal act with fusions of tribalistic folk music that creates for ethereal and enchanting albums. Fusing traditional instruments, acoustic guitars, and tribal drum patterns fused with blast beats creates for some unique and quite memorable albums. While previous albums such as Só Quem Viu o Relâmpago à Sua Direita Sabe have some quite profound moments that really capture the imagination, getting pulled deep within to witness the beauty of nature. Or the more heavier No Ruidar da Mata que Mirra that fuse more traditional black metal and screeching guitars and harsh vocals to create some hard hitting stuff that rock you to the core. The percussion on all the albums are top notch, truly the driving force behind it all.

Now you may be wondering, why am I talking about the previous albums and no the new one, Inpariquipê? Well, its quite different from all the others. Being incredibly stripped back and minimalistic, there's very little guitars and if there are, its only going to be acoustic guitars. They're beautifully played, creating for a deep dreamlike atmosphere that is quite enchanting. Each track is quite long, none of them being under seven minutes, which may seem like a lot, but you'd be surprised by how much more you'd want. And how quickly it passes by. The percussion yet again is the driving force, but whats interesting is the genius fusion of folk style song writing and black metal blast beats to create for some truly captivating works that are able to capture the dynamics of nature its self. Its both aggressive and fast, yet beautiful and serene. There are vocals, as well, chants and other phrases spoken in hushed tones, or in distant visceral screams that ring out through the jungles. Again, its very spacey.

I wouldn't even call this a black metal album, although the fundamentals are there, it just simply is a thing of its own. I don't think there's an album quite like this you'd find out there. And what ever message they were trying to drive home was done flawlessly. The production is so finely done it really helps bring to life the color and how epic and raw the album feels.

Sadly, this is possibly the band's last album, but if it is, what a groundbreaking way to leave the scene and move onto other projects. Like I've said in a previous review, for an album being released so late in the year its incredible how quickly it jumped onto the top of my list. The creativity behind it and just the over all drive and feel of the album is something that I think will stick with me for a long time.

Email ThisBlogThis!Share to TwitterShare to FacebookShare to Pinterest
Labels: 2021, Kaatayra