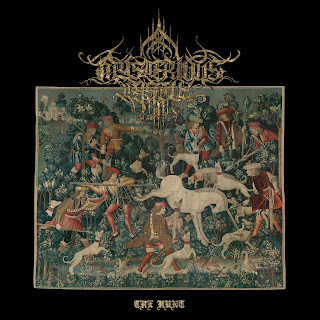 Sometimes there is little need to introduce your self and make your self known to the world. Mysterious Castle is just that. Mysterious. Their album The Hunt is quite the cryptic but heavily melancholy offering. For all we know this could be the only releases to come. But what is here is quite a lot to dissect. Its raw lofi goodness in all aspect.

The guitars are the main driving force of he album. Gothic riffs that leave you hanging on every note, and thanks to the raw ear biting production style, it helps drills its self into your psyche. Its quite entertaining to hear how creatively they intertwine with the drums, which tend to stick with being simplistic, stompy rhythm that helps the music along, with a few twists here and there to keep things interesting. The vocals are also rather par for the course. Echoed screeches of the damned dripped in reverb to help bring in that raw and lofi atmosphere. Its simply there to help fill in the sound, making the music its self feel more whole.

As I stated before, the guitars are what makes this album. Interesting riffs and intricate playing is what helps keep this thirty minute album running and keeps the listener hooked. Its strange how this was release digitally, all on one track, but are clearly split within the track its self. Making for a bout four or five actual songs at a reasonable length that all flow from one to another rather seamlessly. It makes sense how the artist put this together and drives home how different it is compared to other simplistic raw black metal.

What drew me into the album was the artwork its self. It depicts a medieval classic known as The Hunt of the Unicorn and I believe it really fits with the music at hand. Many of the riffs sound almost regal and aristocratic, and when paired with the snare it sounds like their marching through the woods to hunt the mythical beast. Its honestly quite the experience and was something that kept me listening to again and again. I was simply enchanted by the albums mystical nature that I found my self hooked.

In the end, its kind of average, nothing too mind blowing, but the atmosphere and creative guitar riffs and beautiful imagery thanks to the cover at hand really helped make this a memorable experience and something I think should belong in people's musical rotation. Give it a shot.