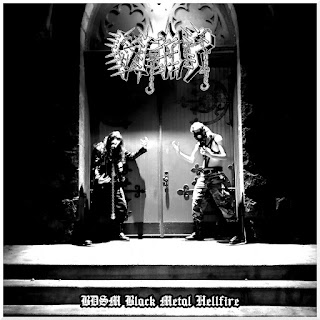 After the synth heavy introduction, you're lead by the nose into an ear rattling guitar, and chest shaking blast beats. The production is extremely well done here, especially the subtle use of synths to help keep it somewhat melodic, though not over bearing the other instruments, save for the transitional parts that introduce that the band can really kill it with the slower sections. The vocals are rather iconic black metal style. Harsh, guttural, and ugly. The lyrics are, honestly, rather hilarious to read through. They were gracious enough to provide some lyrics on their Bandcamp page, and man, is it dirty. Can't think of any other bands that really get sexual in their lyrics. But besides that, they're executed very well within in the music, and just adds to the all around perverse atmosphere.

The guitars are honestly some of my favorite parts of the album. Going by Sadist, they're able to really kill it, having clean and memorable riffs but still keeping it ugly and having a rather heavy bite. There's also something rather demented to it. Manic, almost. But, they're able to keep it fresh, even with the somewhat lengthy track lengths. Three out of five run well over five minutes, but its done very well, with many timing changes, vocal changes, going from iconic black metal to deep, guttural death metal style. The bass, provided by Shibari, are also well executed. Being a major support for the guitars and even having their own little melodic bits. Very punkish, and helps with the all around vibe of the release.