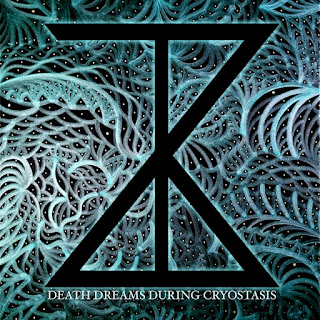 Hailing from the United States Zebulon Kosted has been traveling the dark underground for quite some time and boasting a rather lengthy discography that's a mixture of black metal, doom metal, ambient snyth, and even some folk of a darker nature. All of it centered around the mysteries of space and the life that could be creeping somewhere deep within the universe. The band is centered around one man, Rashid Abdel Ghafur, who provides all the instruments for the band. His latest release Death Dreams During Cryostasis is a rather interesting album that is able to present you with most of the genre influences I mentioned above.

Going in at first I wasn't too sure what to expect. With being described as 'Interdimensionalism' by Rashid, it really sparks the imagination and really gets your thoughts rolling. The first track is a rather somber but melodic acoustic instrumental. It has a very rustic and natural ambiance thanks to the rather deep and bassy acoustic guitars. Its a major change to the following track Again and Again which is an eerie and rather psychedelic ambient track that is littered with the sound of bugs, both natural and synth, a frightening guitar riff that repeats the same set of notes, go figure, again and again.. It really sets up the atmosphere well, especially with the whispered vocals, speaking of twisted dreams and nightmares. Its unsettling and very well done. The following track is again, another ambient track, this one boasting more synths and really pushes that scifi space theme going on. This track however, seemed almost lighthearted and dream like. Its the calm before the storm..

The fourth track of the album, Death Dreams During Cryostasis, was very hard to listen to. I am going to be very blunt here, its not good. Its a mess of a black metal track, with the drums and guitars seemingly out of sync with one another, almost causing panic to the listener not in a pleasant way. It seemed almost amateurish, or a joke especially once the vocals kicked in. Maybe I just don't get it, but going back over the discography and listening to tracks that were more centered around black metal, I was rather shocked with how much of a downgrade it is. The vocals were pretty good though, if they were perhaps in a different setting. And there were some redeeming guitar moments and weird little melodic rhythms. I guess it fits the name that it was given, a deathlike dream that you can't escape from due to being stuck in a icy tomb. Maybe that is what he was aiming for, but I just couldn't understand it personally.

The following two tracks then abruptly changes back to the more subdued ambient tracks of before. Except this time there's this lingering dread and darkness over it all. The synths are much more heavy and over bearing, and the sixth track incorporates a dark and dissonant guitars. In fact the second half of the album, past the fourth track, mirrors the first three tracks. Even the last track being a dark and hypnotic acoustic guitar track. Its rather clever and very well done.

All in all this album is very strange. It left me scratching my head, but definitely is making me want to go back into this band's discography and giving it a good listen. There are many interesting ideas here and at times, this album can be rather soothing, especially the third track It Flies its Self, one of my favorites and I will for sure be returning back to this release. But, again, the fourth track is extremely jarring and really threw me off the first time around. After a few more listens it kinda makes sense, if you give into the suspension of disbelief here and get into the mindset of someone trapped in a spaceship stuck in a frozen slumber, dreaming of death. And soon awakening to some cosmic doom. Give it a listen and you'll see for your self.