Endless Nothing - From the Darkest Depths 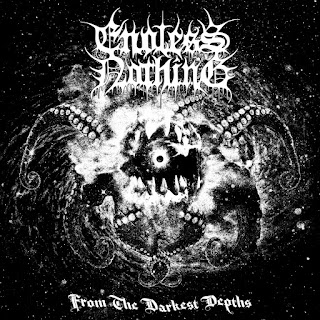 Crawling forth from the darkness of the underground, two wicked entities have come together in collaboration to form Endless Nothing, a nihilistic look into the darkness of the mind. Going by B.M, has teamed up with D.O (of Febris Manea) to spew forth vitriol and hatred to those brave enough to give From the Darkest Depths a listen.

Right off the bat, this is an incredibly solid debut. The first thing I did notice is just how similar the production is compared to Febtis Manea which, isn't that much of a surprise as he does help provide guitar parts and the production. But that doesn't mean B.M's vocal deliverance performance should be dismissed. The vocals are incredibly harsh and filled with intense emotion and really pairs well with D.O's rather iconic, claustrophobic guitar playing. It almost creates this sense of panic, as if something has grabbed you by the throat and just won't let go. Squeezing ever so tightly until the air is snuffed out of you.

The heavy use of synths and more ambient parts of the album are also very well executed. Especially on the last track Into The Void. Its a 7 minute opus of pure madness. With the metal parts split up in between these incredibly eerie ambient noises that really gets the nihilistic thoughts flowing. Its almost like a false sense of relief from the rather constant pounding of guitar riffs and drums. Which isn't a bad thing. In fact it only helps with the atmosphere this album builds. No remorse what so ever. The guitar riffs and the small solo towards the end of the track is also some of the best guitar work on the album, and in my opinion some of D.O's best stuff. This really goes to show just how important it is to have two like minds working in tandem instead of working against each other. These two just play so well together and when combined really makes some far out there stuff that I find simply addicting.

I did find that the album felt rather short. But, it did leave a major impact. I found this album to be incredibly well put together and at times rather catchy. Especially the title track Endless Nothing, where the guitar riffs and the hellish screeching just gets drilled into your head and possessing your mind. I personally have not found much out there that really emulates this sort of sound and I find that so important. They stand out amongst the sea of vampyric nonsense to really give a sense of grounding and still giving respect to the genre its self. Stretching it to its proper extremes and not just combining random thoughts and ideas into one strange mashup. What this album does is what the underground should sound like.

This release isn't for the likes of everyone. Especially those who are more lighthearted. But, everyone should give this a listen. Its important to stare into the darkest depths of the void because you'll never know who or what would be staring back.

Email ThisBlogThis!Share to TwitterShare to FacebookShare to Pinterest
Labels: 2022, Black Metal, Endless Nothing