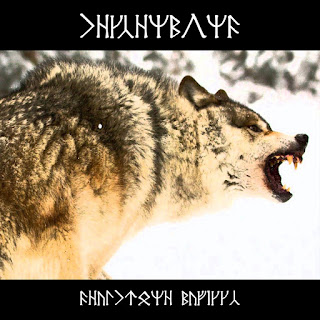 This is the debut of the one man black metal act Hexenmond who's fronted by Ian Farms, aka 'The Witch', who's known for his many other bands such as Goatskin, The Grail, Cyhyraeth, Wiccan, Witches Moon, among others. Its raw, dirty, simplistic black metal. Nothing too ground breaking to say here, other than the little added details that help make this a somewhat enjoyable listen.

I was somewhat familiar with Ian's previous bands, especially The Grail, which is probably his best out of all of them. But with this Hexenmond release, I wasn't really too impressed. Most of his music does have a very raw, lofi approach as per-usual but this just felt very uninspired. A lot of the riffs just fell flat and the repetitive nature of it just got annoying after a while. You'd be surprised that with an album cover like this one, a snarling wolf with a bloodied mouth, would have more impactful and rabid style to the performance, but it really is just rather tamed, and at time kinda boring. The drums are what really drove me insane during my time listening. It was just a very simplistic mid-tempo pattern that changes up to blast beats every once and a while. But there's just something about how it was recorded and produced that just made it very ear grating. I dunno, just doesn't do it for me.

There were some redeeming qualities to the album for sure though. I very much enjoyed the little atmospheric details added in by the synths in certain songs. Like the backing flute on the second track On Winds of Hate is a nice little touch that helps drive that folk atmosphere home. The vocal performance is also pretty strong, which is to be expected from this person's back catalog. They're cold, raw, and rather vicious. Its rather fitting and I feel should've been a main focus for the release. There were even some added howls and almost wolf-like barking towards the middle end of the album that was a cool addition that, again, just drives home that folk and pagan-like atmosphere he was building up here on this album.

There are times when being a one man band can be very beneficial. Especially if you have a very specific vision in mind for the type of release you're doing. Bringing in other people's egos can clash with such a vision, and could end up not coming out how one imagined. But, there are other times when having other people involved with the instrumentation can really help with the actual music at hand. This album felt kinda sloppy and it honestly could've been a lot better. Perhaps after the next album or maybe another could be different, but as a debut release, it was rather lukewarm and left me wanting for much more.