Navalum — On The Threshold of Creation 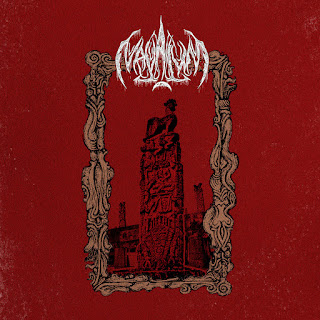 Navalum, a black metal two-piece band hailing from Indonesia present us with their first full length offering On the Threshhold of Creation. This is a very primal album, dripping with pride and primal energy that is very much reflected in its production. There are some folk and melodic influences through out the album, though its not many and sticks to the hard hitting riffs and blast beats, which are par for the course save for the guitar riffs. This was an album that came out towards the tail end of last year but had slipped under my radar, but I am thankful for coming back to it now, this is a very good and memorable album.

The rough production style is what greets you first. I say rough not in a disparaging way, but rough in a way that really gives the guitars and drums a deeper and almost warm feeling to it all. The bass drums are very hardy, really giving the entire album a big 'OOMPH' that rattles one to the core. The guitars are played so relaxed and laid back, but there's still this edge that really packs a punch. The riffs them selves are very well crafted. Melodic and somber and filled with immense emotion. There was a lot of heart put into this album that's for sure. The vocals are strained chants that call out deep into the night, calling back towards the band's tribal ancestors.

Continuing on that note, the album has very much a tribal theme to it all. As coming from the band, “This album is based on the way of life of the ancestral tribe in Sumba Island, Indonesia” and personally I think they were able to nail the vibe. The entire album feels like some sort of forgotten anthem for the tribes. A uniting force that comes through the music and its all thanks to the clever melodic riffs they were able to write. What helps as well is how the songs them selves are structured in a way that flow into one another very organically. Which, I think is a perfect word to describe the album. Organic.

I also wanted to point out just how much I love these vocals. They're strained and angry but not screeching or ear grating. Its like a warrior's last song before he meets his enemy in battle.

This has been an incredibly fun and thoughtful album that I've come across. The band really hits what they were aiming for on the head and I believe have truly honored their ancestors through these chantings. I have a feeling these guys were influenced by the wave of tribal Native American style black metal that has been coming out of north and south America but of course staying very distinct by incorporating their own traditional cultural heritage. A very strong first album, very excited to keep my eyes peeled for what this act has in stored for us in the future.