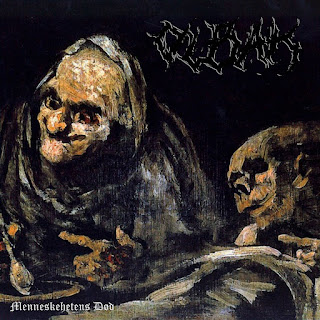 Bringing us their second release Olbak delivers a hard hitting and devastating album titled Menneskehetens Død. Its filled with excellent guitar work, viscous vocals, and some break-neck speed drumming on some tracks, it really makes for a very well crafted album. When coming off of their previous record, the humorous Hot Dinner Date with the Devil, there wasn't much of a change, besides the lyrical content as this new album is all in Norwegian after the sole member of the band, Kablo, relocated from Spain to Norway.

Now, getting into the music at hand, Menneskehetens Død, is very much an ode to the Norwegian second-wave. Its not just a copy and paste that's for sure. Yes, you can hear much of the influences of those old bands, especially in the riffage and song structure. But Kablo is able to keep his clean and very professional style present in the music. The clean, yet cold sounding guitars are incredibly powerful and clean. Sometimes bordering on the sound of death metal guitars. This is not your every day lofi black metal album that's for sure. The drums are your typical range of black metal, though. From your incredibly fast blast beats, to your typical d-beats and so forth. Nothing too mind blowing other than how tight and at times really fast paced drums that really help drive the energy along side the guitars, which are very much the main focus of the album and I think shine the most. The vocals I'm still kind of iffy on. They're raspy and snarly, but the hoarse sound of the vocals them self almost sound like a parody. Maybe some of the previous album didn't fully get shrugged off? Who knows. They're not bad by any means, just not my personal favorite.

This album is very straight forward, and that's what I like about it. There's not beating around the bush and any extra synth frills or anything too over the top and extra. Just solid riffs and guitar playing, solid drums, and even some fun bass parts thrown in there for good measure. It very much captures the old soul of black metal and has a lot of fun with it. It captures it so well that eighth track of the album Bading I asken til våre forfedre sounds very similar to the melodic sections of Nargaroth's Seven Tears Flow Into the River. Its not an exact copy, but its similar enough where my mind can't help but taking me straight to that song.

I've caught this album more recently as it slipped under my radar at the tail end of last year. Originally coming out in December 23, 2021, I'm glad I came around it now, as I've had a lot of fun listening to this release. I'll be very much looking forward to hearing what else Kalbo and Olbak have in store in the future.